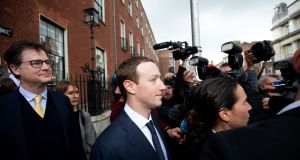 Facebook Mark Zuckerberg after meeting with members of the Oireachtas Committee on Communications, in Dublin. Photograph: Tom Honan

Facebook chief executive Mark Zuckerberg has reiterated his call for regulation of the internet in a bid to deal with harmful content online.

Mr Zuckerberg was speaking as he visited Facebook’s European headquarters in Dublin’s Silicon Docks, following meetings with Irish politicians on fake news, the regulation of social media, transparency in political advertising and protections for young people and vulnerable adults.

The social network’s founder was revisiting arguments he outlined in an op-ed published in several newspapers globally about the level of control private companies had over online speech.

He said Facebook had found itself at the centre of many of these issues in the past few years, including policing harmful content, protecting election integrity and making sure data privacy controls are strong while also ensuring openness and data portability.

“Over the last few years I think we’ve made a good amount of progress in these areas. There is still obviously a lot more to do, but I’m proud of the progress we’ve made so far,” he said. “I do feel that we’re reaching in some of the areas, especially around content for example, a point where it’s not clear to a lot of people around the world – and I agree with them – that we should be making all these decisions ourselves, that we want any private company making decisions on speech.”

He also praised Europe’s introduction of GDPR, which tightened up rules regarding data privacy.

“I think it’s a good foundation that encodes a lot of important values around people being able to choose how their data is used, and at the same time making sure that companies have the ability to use information for safety purposes,” he said.

“GDPR is as important in my view for what it doesn’t do, which is require companies to localise data and store data in a given country.” He said that might be something we take for granted in Ireland or the US, but a strong rule of law and respect for human rights wasn’t global.

“I think that its almost inevitable at this point that every country is going to want comprehensive privacy legislation and having as quickly as possible having us move towards as many countries as possible adopting something like the GDPR framework as opposed to the alternative visions for the internet.”

Mr Zuckerberg said the company had rolled out a number of tools to try to deal with potential interference in the upcoming European Parliament elections, including maintaining a database of political ads and requiring those purchasing such advertisements to register.

“These are important steps, but on some level, I think people don’t want a private company deciding what is political speech and what isn’t. It seems like these are broader democratic questions that having regulation or legislation or more government involvement defining what that is and what companies need to do would be healthier overall and more sustainable.”

Mr Zuckerberg was in Dublin to visit the company’s European headquarters and meet senior politicians. Earlier he had a meeting with Hildegarde Naughton, Eamon Ryan and James Lawless, three members of the International Grand Committee on Disinformation and Fake News.

The three politicians said the Facebook CEO Mark Zuckerberg told them that it was up to governments and not tech companies to introduce new rules about political campaigning on the internet. But a Zuckerberg spokeswoman later disputed the summary of the meeting as “not quite accurate”. She pointed to the recent opinion article published by Mr Zuckerberg, though it supports the updating of legislation.

Mr Zuckerberg was criticised by some Irish politicians, with Fianna Fáil spokesman on communications Timmy Dooley accusing the Facebook founder of being in “damage-limitation mode”. He called on Mr Zuckerberg to engage properly with the Oireachtas Committee on Communications.

“ It is some small progress that he is meeting with a small group of Irish TDs,” he said, “but the time has now come for a more thorough engagement.”

The second meeting of the International Grand Committee on Disinformation and Fake News will take place in Ottawa, Canada, on May 28th.