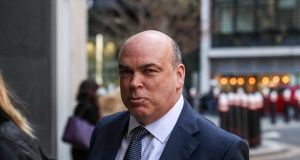 Mike Lynch, former chief executive officer of Autonomy arrives for a court hearing at The Rolls Building in London on Monday.

Mike Lynch, the founder of the software group Autonomy, was a “controlling and demanding individual” of whom it was inconceivable that he was unaware of the fraudulent practices alleged to have been taking place at his company, the high court has heard. The claims are included in the opening submissions of a civil claim brought by Hewlett Packard against Mr Lynch following the £8 billion sale of his company to the US firm in 2011.

Court documents submitted by HP said Mr Lynch took an interest in trivial details of his firm’s operations to a level that was “hard to imagine – coming to the attention of the CEO of any other large company”, including approving a £2,659 upgrade to a graphic designer’s computer.

They claim he exerted control over Autonomy’s chief finance officer, Sushovan Hussain, who is a co-defendant in the civil claim and who is appealing against a conviction in California in a related case, to the point that he would make threats when he tried to take leave.

In one email, referred to in the claimant’s opening submissions, Mr Lynch wrote to Mr Hussain: “Thank you for your threat to take five weeks off between now and the [year end]. Please do that and you will see the consequences ... Sushovan I am sick of dealing with this s**t from people ... do what the f**k you like.”

This type of email was typical of Mr Lynch, the claimants alleged, who “created an oppressive work environment in which employees felt ‘extreme pressure’ to meet revenue goals”.

In an email on July 29th, 2009, Mr Lynch demanded a sales representative “stay up all night and get this done with your team, ring whom ever you need but we are putting in the maximum proposal on time – Fail this and I have no need of people with this kind of attitude”. The defence for Mr Lynch and Mr Hussain, who are joint defendants, has said Autonomy’s finances were audited by Deloitte and that the business took a downturn after it was acquired because of mismanagement by HP.

A spokesperson for Mr Lynch said: “Mike Lynch is pleased to finally have the opportunity to respond in court to HP’s accusations.

“There was no fraud at Autonomy. Rather, this is a case that distils down to a dispute over differences between UK and US accounting systems and will focus on the appropriate exercise of business judgments made in a particular context and time with the full knowledge and approval of numerous financial and technical experts and advisers.

“The real story is that HP, after a history of failed acquisitions, botched the purchase of Autonomy and destroyed the company, seeking to blame others. Mike will not be a scapegoat for their failures.”