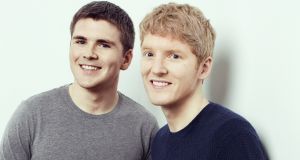 Stripe founders John and Patrick Collison. The company was earlier this year valued at €19.9 billion

Stripe, the online payments company founded by Patrick and John Collison, intends to create hundreds of additional engineering jobs in Dublin after securing an e-money licence from the Central Bank.

The new licence allows Stripe to continue to process payments for users across Europe regardless of the outcome of Brexit negotiations.

While Brexit concerns played a part in the company’s decision to seek the licence, the company insists the primary reason for obtaining it is due to its plan to expand operations locally.

“Dublin is the heart of Stripe in Europe. It’s our fastest-growing office and our first international engineering hub with over 150 employees. Our licence here is another testament to our commitment to Ireland, and we plan on deepening that over the long term,” said a company spokesman.

San Francisco-headquartered Stripe is one of a small number of companies to secure a so-called electronic money institution licence from the Central Bank in recent years. Others include London-based fintech Soldo, which obtained one earlier this month, PerfectCard, and Facebook, which received its e-money licence in 2016.

Stripe, which also has a similar licence from the UK financial regulator, set up an international engineering hub – its first outside of the United States – in Dublin early last year. It initially announced plans to take on a small number of employees but the success of the local operation has led it to decide to take on hundreds of additional software engineers over the coming years.

The Irish operation is seen as a key driver for Stripe’s push into continental Europe. It recently launched in Italy and rolled out pilots in Estonia, Poland, Lithuania and Latvia.

The company, whose founders come from Co Limerick, declined to comment on exactly how many additional jobs might be created and when.

Founded in 2009, Stripe raised $100 million (€89 million) in a follow-on funding round earlier this year in a move that valued the company at $22.5 billion (€19.9 billion). At ages 30 and 28 respectively, Patrick and John Collison are among the world’s youngest billionaires.

Stripe, which builds software and payment infrastructure that helps businesses accept money online and across borders, employs more than 1,500 people worldwide and handles billions of dollars in transactions each year.

While it started off securing relatively small clients it now counts the likes of Amazon, Uber, Booking. com, Deliveroo, Shopify and Google among its customers.

Although Stripe has recorded phenomenal growth since it was established, the company’s founders insist it has barely begun to take advantage of the opportunities open to it given that only about 3 per cent of global commerce currently happens online.

1 O’Brien may pull off $1.7bn Digicel debt write-off – but at what cost?
2 Covid-19: Westport braces for tough times ahead
3 An Post sees big jump in people opening new current accounts
4 Why the State should give us all gift vouchers, let's call them Paschalbonds
5 Camile restaurant chain stops paying rents ‘to safeguard future’
Real news has value SUBSCRIBE