This smart doorbell falls just short of a ringing endorsement

SkyBell means you will never miss a house call, but there are some drawbacks 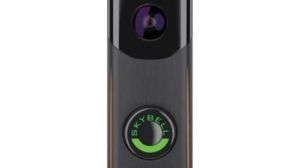 The humble doorbell has been overhauled in recent years. Instead of a chime announcing potential visitors, now we have motion sensors that go off as soon as someone sets foot on the garden path. And instead of getting stuck with an overenthusiastic charity collector, you can peek at the camera, see who is standing on your doorstep and decide whether or not you want to open the door.

The SkyBell wifi doorbell camera, which is sold through Cork-based Smartzone, keeps it simple. There are motion alerts that cover about 8ft in front of the bell – about the length of my front path – and alerts when the doorbell is pushed.

The bell itself needs to be wired in; there are no options for battery-only bells like the Ring has. But that also means that it is a little slimmer than the original Ring, because it has no need for a battery.

As you approach the SkyBell, it picks up your movement and the LED branding on the front brightens, making it more obvious that this is the doorbell, just in case you were in danger of missing it. It’s a nice touch that you can customise the colour and brightness of that LED, or turn it off altogether to make the doorbell a little more subtle.

Positioning the doorbell is important. Too far back in a nook in your porch and you cut off some of its field of vision; too far out and you’ll end up with a wider view than necessary of the path outside your home (unless you have a long private drive). That could cause issues if you have motion alerts enabled, with every movement on the path triggering the camera and resulting in the uploading of a short video file to your account. You can go back through the video files at your leisure, and download any you need to your phone or laptop.

The bell itself works well. When someone pushes the doorbell, you get an alert and can choose whether or not to answer the “ring” and speak to your visitor, even remotely. The motion alerts can also act as a handy early warning system if you are trying to avoid any callers in particular.

The notifications mean you won’t miss a call to your front door, even if you can’t pick it up immediately. It has been handy for figuring out where the postman left a parcel, for example.

If you live in a house that doesn’t have a front garden and instead looks straight out on to the street, you might want to disable the motion alerts though. The system doesn’t distinguish between people and things, telling you only that the bell has detected motion outside. When we had a storm a couple of weeks ago, I had to disable motion alerts because the tree outside was triggering the camera as the wind whipped it around.

The good news is that you can turn alerts off during certain hours, so your phone won’t be buzzing with notifications all night as cars pass by. You can also pause and resume recording schedules through the app’s settings, so if you don’t want the bell keeping track of callers at certain times, you can switch the recording off. And – perhaps most usefully – you can disable the indoor chime, so if you don’t want to be disturbed, you can silence the bell temporarily.

You can also use the doorbell as a security camera, peeking in on the live stream whenever you feel like it.

The downside? Amyone with access to the account who is living in the house can also see your comings and goings. That’s true of every connected doorbell and certainly not unique to the SkyBell. However, it’s something anyone considering installing a video bell should bear in mind.

The slimline option fits on most door frames. That is unlike the original Ring and the round version of the SkyBell doorbell camera, the SkyBell HD.

The quality of the video footage is great in daylight; when the infrared kicks in for night vision, it’s not quite as clear, but the subject is identifiable once they are close enough.

You can’t take still photographs through the interface.

The bell links in with Alarm.com’s home security and smart heating system, so it’s all done from a single interface.

Easy to use and manage, the SkyBell keeps it simple.