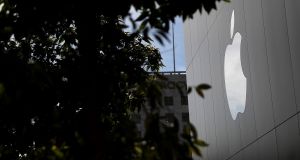 Last week, Apple said it plans to bring its net cash position down to zero, meaning cash levels would equal debt outstanding. Apple held net cash of $163 billion at the end of 2017.

Apple is pulling back on buying corporate bonds with its overseas cash as it prepares to bring the money home to the United States, according to sources.

About $157 billion (€127 billion) of Apple’s $285 billion (€230 billion) in cash, mostly held overseas, is invested in corporate debt, making it a leading lender. The cutback in buying, echoed by other tech firms with sizable overseas holdings, such as Alphabet and Oracle, could have an impact on corporate borrowing costs.

The tech companies have started sitting out bond deals this year as they look to trim their holdings, the sources said.

US companies with savings held offshore will likely move them home or use them by 2020, Credit Suisse analyst Zoltan Pozsar wrote in a January 29th report.

Investors in investment-grade corporate bonds have been bracing for a market with fewer buyers since the new US tax law was enacted late last year. It gives companies incentive to repatriate their overseas money.

Companies such as Apple have been buying bonds with offshore funds rather than simply holding cash. A representative for Apple declined to comment.

“The pullback of a big investor like the tech companies adds to the underlying weakness” in the investment-grade corporate-bond market, said David Knutson, the head of Americas credit research at Schroder Investment Management, which oversees more than $500 billion (€403 billion).

The firms have their money in high-quality, short-duration paper – the easily traded part of the market – so other investors should pick up the slack, Mr Knutson said.

Corporate-bond sales, which typically attract an average of 3.5 times as many orders as there are securities available, have seen that oversubscription rate fall this year partly because cash-rich companies are buying less, according to one banker who has brought deals to market this year.

In one bond offering, participation by tech companies fell to one-sixth of what used to be their typical involvement, according to a syndicate head at another bank. Two things concern bankers about the pullback. The tech companies aren’t only big buyers of high-grade corporate bonds, they’re also issuers.

US companies have an estimated $3.1 trillion (2.5 trillion) of corporate cash offshore, most of it in government and corporate bonds. The Trump administration’s tax bill slashes the tax rate on repatriated cash and liquid securities from 35 per cent to 15.5 per cent.

Last week, Apple said it plans to bring its net cash position down to zero, meaning cash levels would equal debt outstanding. Apple held net cash of $163 billion (€132 billion) at the end of 2017.