Toyota to introduce own finance house for Irish car buyers 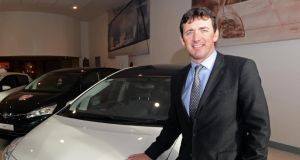 The car giant Toyota has introduced its own finance house to the Irish market, offering loans and finance deals on new and used vehicles through its dealer network. Toyota Financial Services Ireland, which will begin with 22 staff, has an initial capitalisation of more than €20 million. It expects total loan assets to grow to more than €350 million within five years.

With close to 50 per cent of Toyota’s customers in the Republic availing of some form of finance, the new banking arm will offer products such as personal contract plan, or PCP, deals and hire-purchase agreements. It expects about 4,000 new and used contracts to be written in the first year, with a total value of €70 million. According to Toyota Ireland’s chief executive, Steve Tormey, rates on PCP deals start at 2.9 per cent but average 3.9 per cent, putting the company “in a very competitive position relative to both local and captive banks”.

Mr Tormey says the hit that resale values are taking because of the ongoing slide in diesel sales is reflected in the guaranteed residual values it is writing into its PCP deals. “Because Toyota Financial Services guarantees the future residual values of the car – and not the dealer, as with other banks – we see the guaranteed value for a hybrid after three years is working out at 43 per cent, whereas we’ve put it down to 37 per cent for a diesel. That’s because we have to be sure that in three years’ time we’re happy with the resale price we can get for that car.” The bank estimates petrol models’ future value at 39 per cent.

With diesel now representing just one in five Toyota passenger-car sales in Ireland, Mr Tormey said the firm would listen to customers on the matter. “There are countries in Europe where Toyota no longer offer diesel passenger cars, Norway being one and Italy another.”

The car company’s in-house bank already operates in more than 30 countries and has global assets of €160 billion. The new Irish operation is the first joint venture between the car firm’s global finance arm and a private national distributor. Toyota’s finance offerings were previously provided by Bank of Ireland.

Loans will be available for all new Toyota and Lexus models, including commercial vehicles, as well as used cars from other brands on sale from Toyota dealers. New-car sales figures released earlier this week show Toyota is the bestselling car brand in Ireland so far in 2018.