Merc perks: happiness is driving an Audi or Mercedes 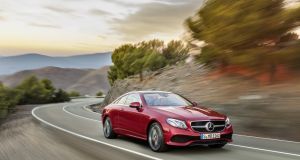 Mercedes tied with Audi for first place in the driver satisfaction survey, with Mazda in second and Skoda in third place

Audi and Mercedes drivers are the most satisfied owners, according to a new survey by motor insurer 123.ie.

Its survey of almost 3,500 motorists found that when asked about overall satisfaction with their current car, Audi and Mercedes jointly topped the polls in this year’s survey, with both brands receiving an 82 per cent satisfaction rating. Mazda and Skoda secured second and third place respectively.

However, with only a 7 per cent difference between the top and bottom spots, Irish drivers seem to be happy with their current choice of vehicle overall.

According to the 123.ie research, the Audi and Toyota owners demonstrated high levels of brand loyalty, with 79 per cent of owners stating they would purchase another vehicle from the same brand. Citroën drivers were least likely to purchase from the brand again (36 per cent), followed by Opel (40 per cent).

Views on the best sellers

Asked about their views on the 10 top-selling car brands in the Republic in 2017, those surveyed ranked Renault as most disliked, with 28 per cent of drivers saying it is the car they would least consider. Kia (12 per cent) and Seat (11 per cent) were second and third place respectively.

Given the chance to opt for multiple reasons why they were least likely to opt for a particular brand of car from the list of 2017’s top selling marques in Ireland, the most common response for those who are least likely to opt for Renault was poor reputation, while for Opel it was bad personal experience. And, in a departure from last year’s results, Skoda replaced Nissan as the ugliest brand – by just 1 per cent.

In line with last year’s survey, black was once again the preferred car colour with nearly one third (30 per cent) choosing it as their favourite. Maroon was voted the most disliked colour, with just 3 per cent stating it as their preferred colour. Reflecting the slowdown in new car sales last year, nearly two-thirds of drivers (62 per cent) do not plan to change their car in 2018.

Of those who will purchase a new vehicle this year, the majority (65 per cent) will purchase second-hand, and more than 60 per cent are likely to purchase the same car brand.

With weaker Sterling prices luring buyers across More than two-thirds (65 per cent) believe importing offers motorists better value, but only 5 per cent of respondents intend to purchase an imported vehicle this year.

“While most people recognise that importing a vehicle can offer good value, it might be the perceived hassle involved that deters the majority from taking this route. It seems people do prefer the simple option and they there therefore gravitate towards dealers when looking for a car,” said Padraig O’Neill, head of marketing at 123.ie.

Nearly two-thirds of drivers (60 per cent) would consider switching to an electric vehicle if fuel prices continue to rise. However there are a number of deterrents to purchasing a plug-in car, including concern about battery life (33 per cent), a lack of charging points throughout the Republic (22 per ent) and overall expense (17 per cent).

Hybrids have continued to grow in popularity as 15 per cent of drivers would now consider purchasing a vehicle with a hybrid engine, compared to just 4 per cent in 2015.

“The Government’s intention to phase out diesel engines is definitely having an impact on the public’s perception of the fuel’s long-term value,” said O’Neill.

“However, whether this will have a corresponding long-term impact on sales remains to be seen, as almost half of drivers still feel that diesel offers better mileage for long journeys and, for a quarter of drivers [26 per cent], they are still seen as the most efficient and affordable vehicles.”

How do you get bereaved fathers to talk? Bring a football
3