Eir ‘very happy’ with Huawei as supplier for 5G network

Chinese technology giant is accused by US of industrial espionage 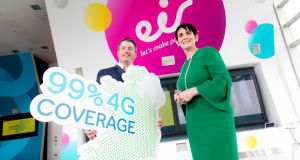 Fergal McCann, director of mobile networks at Eir and Carolan Lennon, chief executive. The telecommunications company will use Huawei to supply the radio access equipment for its 5G network

Eir chief executive Carolan Lennon said the company is “very happy” to use Huawei equipment for its new 5G network in the Republic, despite US claims that the Chinese company poses a security risk.

The Chinese technology giant is at the centre of trade tensions between the US and China and is accused by the US of industrial espionage.

“We’re very happy with them as a supplier. They have great kit,” Ms Lennon said, while noting the UK had decided not to ban Huawei from the rollout of its 5G network.

The UK government said on Tuesday it would allow Huawei a limited role in building its 5G networks.

The US wanted UK prime minister Boris Johnson to ban Huawei completely, arguing that Beijing could use the company’s equipment to steal Western secrets, a claim the Chinese company vehemently denies.

She said Eir was now the State’s largest 5G operator with its network covering 25 per cent of the population.

Separately, Eir announced that it had passed the first 50,000 premises with its new fibre broadband network, which is now available in 28 urban areas. Ms Lennon, who took over as chief executive in 2018, has refocused the company on winning back market share from rivals in urban areas.

The company’s broadband market share in Dublin is currently less than 30 per cent, which is low for a market incumbent.

To reverse this, it is planning to spend €1 billion on its network, €500 million of which will go towards the rollout of fibre.

Ms Lennon said the fibre rollout will ramp up considerably in the coming months with the company expecting to pass between 60,000 to 70,000 premises per quarter.

“Ultimately this ambitious project will stretch to 1.4 million homes and businesses,” she said, “Once completed, Eir’s fibre network will cover 84 per cent of the premises in Ireland with 90 per cent served by fibre-to-the-home,” Ms Lennon said.

1 Hurrah for the companies giving staff more time off
2 RTÉ to seek 70 voluntary redundancies as ‘large costs’ beckon in 2021
3 Covid-19 will worsen shortage of accountants, says CPA Ireland
4 Some Irish money market funds came close to danger in March
5 In praise of Gogglebox Ireland, an essential service in all but name
Real news has value SUBSCRIBE