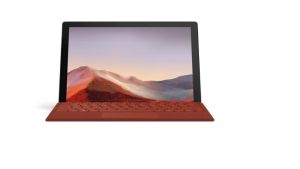 Microsoft Surface Pro 7: another solid Surface Pro, but is the format getting a bit tired?

Where to buy: microsoft.com

When Microsoft unveiled its plans for its own laptops back in 2012, it was a bit of a shock. Instead of providing the operating system and software to its partners, the Windows maker was also going to be competing directly with them.

The Surface Pro was seen as Microsoft’s answer to Apple with its iPad. A tablet that could be used as a PC, the Surface Pro also saw the introduction of Windows 8, a new operating system that focused on the touch interface.

It was a strange time. The then-president of Windows Steve Sinofsky used one as a skateboard to prove how tough it was. Microsoft came up with an ad that involved lots of people dancing around with Surface Pro machines to showcase the device. Windows 8 wasn’t the hit that Microsoft expected either.

The operating system has since been replaced with Windows 10, and the Surface Pro has been redesigned to make it slimmer, with a larger screen and the obvious internal upgrades.

We are now several Surface Pro iterations in, and over that time, the Surface Pro has become a much more realistic option if you want to replace your regular laptop with something more flexible.

The Pro 7 has now hit the market, but is it worth the upgrade? I have been using the Surface Pro 7 as my work device for the past month, ditching my standard laptop in favour of Microsoft’s latest device. That means a lot of typing, some work with internal publishing systems and the odd bit of image editing here and there. Enough to put it under a bit of pressure, but nothing overly strenuous.

The Surface Pro 7 looks very similar to the Surface Pro 6. It has a 12.3-inch touchscreen, a flip-out kickstand that you can adjust to any angle that suits you; there is a small micro SD card slot tucked underneath the kickstand too. On one side, you get a USB port for attaching your USB key or other peripherals, the power connection and a USB C port, a new addition for the Pro 7 and the lack of which was a bone of contention with the Pro 6. On the other, you have the headphone jack, while the top of the case is where you’ll find your power and volume controls; a camera for video conferencing is set into the screen’s surround, and a rear facing camera that clocks in at 8 megapixels.

Like its predecessors, the Pro 7 has a strong magnetic connector for the protective covers that also double as keyboards. That’s an added extra you will have to shell out for, but if you plan to do a lot of typing on the device, you’ll be glad you invested.

So how does the new version stack up? In terms of speed and performance, the hybrid device stands up well in comparison to its predecessor. The Ice Lake processors – a Core i7 1.3Ghz CPU – and the 16GB of RAM make everything run smoothly.

One thing if you plan to ditch the laptop is how well the Surface travels. While it’s light enough to carry around in your bag unhindered, it works better on a desk than on your lap. For example, it can be a bit more difficult to deal with when working on the bus – the balance just isn’t the same on your lap, and it’s not as stable. That is where the strong magnets on the keyboard come in handy; I’ve had to grab it a few times when the bus lurches or hits a bump.

Having the Type Cover as an added extra is a little frustrating. Personally, I couldn’t have used the Surface Pro 7 without the keyboard cover. If you aren’t doing a lot of typing, you will get by with the on-screen keyboard, but if you need to produce a few hundred words over a couple of hours, you’ll need a physical keyboard.

The Surface Pro 7 is powerful yet light, a compromise between a tablet such as the iPad and a full laptop. It also addresses some of the issues that the Pro 6 brought – such as the USB C port. The upgraded chips make the Pro 7 easy to work with too.

The design is functional rather than flashy; if you want something with a little more “wow” factor, the Surface Pro X is probably a better bet. The bezels are still obvious, and as a tablet, the Surface Pro 7 is a little too heavy, but most people will likely use this for its laptop replacement capabilities, with the tablet functions as a nice extra.

Accessories such as the keyboard cover will push the cost up, but they are essential to use the Pro 7 as a laptop for any length of time.

Another solid Surface Pro, but is the format getting a bit tired?

1 Knock gets visit from world’s largest passenger plane
2 Exposed to coronavirus: How Irish business is coping with fallout
3 How do you know if you are wealthy? It’s not straightforward
4 Fáilte Ireland launches €6m campaign to boost holidays at home
5 Ires Reit to build 600 apartments despite political uncertainty
Real news has value SUBSCRIBE