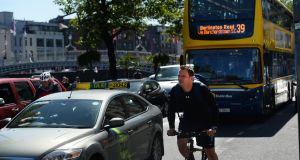 US technology company Dropbox, which employs more than 160 people in the Republic, has become the first business to formally support the work of Dublin Cycling Campaign.

The file hosting service is officially becoming a business member of the organisation.

“We understand the importance of making cities and towns bicycle friendly, and are delighted to partner with Dublin Cycling Campaign,” said Paulo Rodriguez, director of solutions of EMEA at Dropbox. “They are advocating to make cycling a safe aspect of everyday life. We have been very impressed with their unceasing work to effect change at national, local and community levels.”

Founded in 1993 and with more than 700 members, Dublin Cycling Campaign is an independent, voluntary group lobbying to bring about improved conditions for cyclists and greater recognition of the benefits of cycling.

“Our demands for safe conditions for people who chose to cycle around the city are not new. Hopefully the support of Dropbox will lead to a real commitment from those responsible for our urban design to realise Dublin’s potential as a city where everyone can choose to cycle,” said Louise Williams, vice-chairwoman of the campaign.

“We are definitely interested in support from other companies, tech or otherwise,” she added.