Apple’s iPad turns 10 with hints of a resurgent future 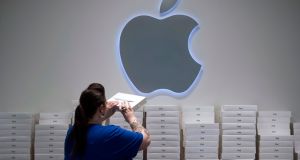 An Apple staffer stacks boxes of the iPad at an Apple store. Photograph: David Paul Morris/Bloomberg

When Apple unveiled the iPad on January 27th, 2010, it didn’t just create a new product, it created a whole new category.

Steve Jobs took to the stage at the Yerba Buena Cultural Center for the Arts in San Francisco to announce the new device, which would act as a bridge between smartphones and laptops. It was, he said, “most advanced technology in a magical and revolutionary device”.

Reaction to the iPad was mixed. While most could see the potential that the iPad could bring, others were – in their words – underwhelmed. While Jobs talked up the magical properties of Apple’s new product, one reaction published in the Guardian was “Is that it then? A bloody great iPhone?”

But anyone who doubted the iPad would become a success for Apple saw their doubts dispelled in the following months and years. The company sold three million iPads in 80 days.

Sales of the iPad reached a peak in 2013, when the company sold 26 million units over the last months of the year. But, since 2012, the iPad has accounted for a smaller proportion of Apple’s revenues.

That doesn’t mean it hasn’t been a success. Despite a slowing tablet market, the iPad has been outperforming rivals.

Tablet shipments overall are down in recent years. In 2019, the first two quarters of the year saw a decline in the overall number of tablets shipped, before returning to growth in the third quarter. But Apple managed to hang on to its growth during the year, at a time when its rivals were feeling the squeeze. In the third quarter, Apple grew 21.8 per cent over last year, according to IDC, helped by the introduction of a new iPad late in the quarter.

The iPad itself hasn’t changed drastically over the years – at least on the outside. There have been design tweaks; the original iPad didn’t include a front facing camera, while the most recent iPad Pro will unlock your device with facial recognition. The size has also changed, with the introduction of the 7.9 inch iPad Mini in 2012, the thinner iPad Air in 2013 and the 12.9 inch iPad Pro in 2015 as Apple tried to appeal to new markets.

There is speculation that the iPad may be about to play a more important role in personal computing. At its WWDC keynote in June last year, the company announced PadOS, an operating system designed specifically for the iPad, signalling that the iPad could soon be the future of Apple’s computing. More significantly, it could pose a threat to the laptop market.