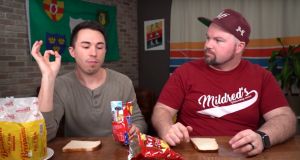 There exists a genre of YouTube videos where people try different food for the first time. Hear me out, it’s really entertaining and it just sucks you in. There are ones where little kids try food that makes them say “yuck”, an entire series where Irish people try foreign food (“these yokes taste rotten so they do”, etc), and this one called Men Try Food.

It’s really Americans Try Food because most of the videos consist of two American guys sampling “weird” European snacks and giggling at how strange it all is. The best one by far is where they receive a box of Irish goodies from Craic Pack. For starters, it makes you realise how unique the crisp sandwich is. And yes, they try both Tayto and King Crisps (on Brennan’s bread obviously).

As they progress through various options the Americans get very excited for Irish food; the spice bag completely blows their mind and leaves you wondering if we are culinary geniuses. Chef brown sauce is unlike anything they’ve ever tasted, and they rate a Jacob’s Club over a Cadbury Snack.

Now, I want to see one where they’re given cabbage boiled until it’s mush, Galtee cheese slices, a packet of Scampi Fries from the local, and a breakfast roll from Dublin airport.