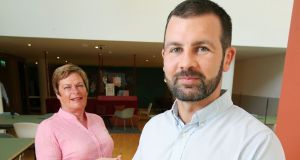 Dr Vicky Kell, Invest NI, with Jason McKeown, Neurovalens. The Modius band works by tapping into a nerve that runs directly to the brain stem.

A high-tech Belfast firm is hoping to take a big bite out of the multibillion pound global weight-loss market with the launch of a new device that sends a signal to the brain to suppress appetites on the crowdfunding website Indiegogo next month.

Neurovalens, which was founded by doctors and neuroscientists, makes wearable technology that combines neuroscience and technology to help people deal with health issues.

It plans to launch Modius, its first wearable non-invasive brainstem stimulation device, which it claims can address metabolism rates, appetite and fat storage, in the UK and the US on August 8th.

The company is starting a crowdfunding campaign next month on Indiegogo, but its main aim isn’t to raise money. With a relatively modest goal of $50,000, Neurovalens is hoping to build a community of users who engage with the company and help develop the Modius band by providing feedback on their experience.

The tech firm was set up by Dromore doctor Jason McKeown and neuroscientist Paul McGeoch, and was named in 2015 as Northern Ireland’s best start-up in the Invest NI Propel Programme awards.

The science behind the band has been proven, Dr McKeown said. It works on the hypothalamus, which is essentially a control centre, particularly for metabolism, appetite and fat storage.

“The mechanism for that was in place to stop you losing weight. In the event there wasn’t much food available, your body changes its metabolism to try and increase fat storage,” he said. “It’s very well tuned at stopping you losing fat; unfortunately it’s not finely tuned to stop you becoming overweight.”

The western lifestyle – sedentary with high calorie and high sugar diets – can effectively damage that area of the brain, Dr McKeown said, and push what is considered “normal” body weight upwards. That can make it harder to lose and keep extra weight off.

“Our interest was in how to stimulate that area and bring it back to normal,” he said. The Modius band works by tapping into a nerve that runs directly to the brain stem.

“If you can send signals to those nerves you can modify the behaviour of the brain. What we do is use a well-defined pathway that links into this control centre for metabolism that happens to be behind your ear. It’s close to the surface, you don’t need an implant or surgery; you can actually stick the device on the area over the nerve and stimulate it through the skin,” Dr McKeown said. “Repeated stimulation of that part of the brain sends the signal to the body that fat storage needs to be reduced.”

An implantable device currently on offer in the US works on a similar premise, but costs about $30,000 and is only approved for patients who are extremely overweight. The Modius band is designed to be accessible to a wider range of consumers.

It is pitched as a long-term device, but those using the band could adjust the sessions down to once a week or stop using it altogether.

Dr McKeown said the product passed a major milestone when the US Food and Drug Administration agreed to allow the company to sell the device directly to consumers, rather than keep it as a prescription or medical device available only through GPs or hospitals.

1 How to gift your child a house deposit . . . tax free
2 BOI customers to be charged twice with bank fees on New Year’s Eve
3 Decades of work and a bit of luck drove Oxford vaccine success
4 Ryanair warns it may reduce more services and relocate operations
5 Son putting elderly dad under pressure to sign over land
Real news has value SUBSCRIBE