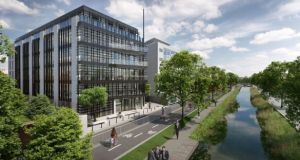 Zendesk has signed a lease to move to 55 Charlemont Place, a six-storey stand-alone bock on the edge of the Grand Canal

Cloud-based customer service software firm Zendesk, which established an office in Dublin with just two engineers in 2012, is to take on an additional 300 people over the next three to four years to bring its Irish head count to more than 500.

The company, which currently employs about 200 people in Ireland, also confirmed it has agreed a lease to expand into 55 Charlemont Place next year, taking over 58,000 sq ft of grade A office space in Dublin for its Europe, Middle East and Africa (EMEA) headquarters, which is currently located nearby at One Grand Parade.

Zendesk said it is recruiting for engineering, DevOps, infrastructure, product management as well as Android/iOS development roles. In addition, it is also looking to fill a number of non-tech roles in sales, customer advocacy, finance and legal.

The company’s software enables organisations to provide helpdesk service across multiple channels. Zendesk has over 100,000 paid customer accounts globally in over 150 countries and territories.

About 35,000 paid customer accounts are in EMEA, which has seen growth of 30 per cent in the 12 months to the end of March.

First quarter revenue for the company increased 36 per cent year-on-year to $93 million (€ 81.6 million) with turnover for the second quarter forecast to be in the range of $98 million to $100 million.

The San Francisco-headquartered company, which was founded by Mikkel Svane, Morten Primdahl, and Alexander Aghassipour in Copenhagen, Denmark in 2007, is listed on the New York Stock Exchange. It now has more than 1,700 employees worldwide.

Speaking to The Irish Times, Colum Twomey, vice president of product engineering at Zendesk and the company’s first hire in Ireland, welcomed the signing of a lease for 55 Charlemont Place, a six-storey stand-alone bock on the edge of the Grand Canal. He said the company had been forced to rent additional office space in the capital in recent months due to growth.

“I never knew how big the company was going to be when I joined and still don’t know,” he said. The original plan was to grow Zendesk to 50 people so to get to 200 in four years and with plans to more than double that now is extraordinary,” said Mr Twomey.

“It will be a challenge filling 300 additional roles but I’ve been in the industry for over 30 years and people have always claimed it is getting harder to find people. I don’t find that. I think that if you plan far enough ahead and are strategic enough about things, then it isn’t a problem,” he added.

1 Can we finally say farewell to the scourge of hot-desking?
2 Big Four told to outline plans for audit split in UK by October
3 Why gift a son now if it eats into his tax-free inheritance threshold?
4 Irish pharma sector warns of protectionism as US corners supply
5 Mortgage arrears: Prevention is definitely better than cure
Real news has value SUBSCRIBE