Weblog: Humanlike robots in Hong Kong may stir feelings of repulsion not love 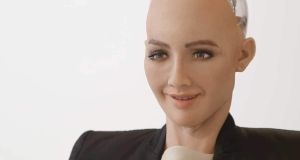 “Hello, I am a robot”: The Uncanny Valley is the label for when robots or animations look humanlike but not enough and cause onlookers to feel uncomfortable.

Robots and artificial intelligence (AI) were very much present at last week’s Rise Conference in Hong Kong. One of the highlights seemed to be two robots “debating” the future of humanity. These robots – Sophia and Han –- are from the Hanson Robotics company. Their movements, interactions and responses are powered by a mixture of pre-programmed and learning-oriented technologies, explained Ben Goertzel, chief scientist at Hanson and a researcher in AI for over 30 years

As Goertzel introduced the robots, he described them as “beautiful” but in all honesty, these robots are repulsive. I don’t mean this in the pejorative sense: they literally evoke feelings of repulsion as described by the Uncanny Valley phenomenon whereby robots or animations look humanlike but not enough, this causing human onlookers to feel uncomfortable.

Sophia and Han engaged in a debate that felt overly pre-scripted. So, while it is obvious that AI was used to help the robots mine human speech and vocal patterns from various sources, it doesn’t translate to convincing conversation. Do not fear the rise of the robots just yet.