Capacity of Irish data centres to double in next four to five years, says report 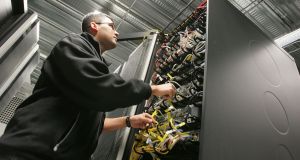 Some 16 data centres became operational in 2018 with a further 28 in development, according to a new report. Photograph: Alan Betson

Dublin is now Europe’s largest data hosting cluster, surpassing London with 25 per cent of the European market, according to a new report, which also shows that more than €1 billion was spent on data centres in Ireland last year.

The report from Host In Ireland, a strategic global initiative created to increase awareness of the benefits of hosting digital assets here, and Bitpower, a digital information provider, shows that there were 53 data centres in operation in the State at the end of 2018, with a capital investment spend of over €1 billion in 2018. A further spend of some €1.3 billion is expected in 2019.

The Republic has become an increasingly-popular location for data centres of global technology firms, with Facebook opening a facility in Clonee, Microsoft ramping up construction in Grange Castle, and Amazon Web Services building in Clonshaugh and Tallaght.

According to the report, some 16 data centres became operational over the course of 2018 with a further 28 in development, “the highest level of activity we’ve seen yet”.

At the end of 2018, there were about three million square feet of data centre space in the Dublin Metro area, and according to the report, “indications are that this capacity will double in four to five years” with a spend of about €4 billion over the coming four years.

“We expect 2019 to bring continued growth as Ireland continues to build its reputation”, said Garry Connolly, president and founder of Host in Ireland.

Figures from the IDA show that the hosting industry had created about 2,800

jobs in Ireland as of May 2018, a figure that is expected to continue to rise.