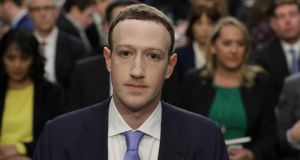 A UK parliamentary committee says secret internal messages between top Facebook executives, held under seal in a US court, will make “good evidence” for Irish data watchdog Helen Dixon as she investigates the web giant.

The emails, which were submitted as evidence in a lawsuit between Facebook and app developer Six4Three but held back from public disclosure, were eventually produced to a House of Commons digital committee after its chairman threatened Six4Three’s founder that he could be held in contempt.

The highly sensitive emails include messages involving Mark Zuckerberg, Facebook’s founder, and deal with the intricate details of how Facebook collects and uses private data and also how it tries to stymie competitors.

The committee last week alleged in a public report that the emails show “Facebook intentionally and knowingly violated both data privacy and anti-competition laws”.

It also suggested that UK authorities could supply the Six4Three material to Ms Dixon, who as head of the Data Protection Commission here is the lead regulator of Facebook outside the US. No comment on this was available from her office prior to publication.

“We hope that these documents will provide useful evidence for Helen Dixon ... in her current investigations into the way in which Facebook targeted, monitored and monetised its users,” said the UK committee.

Ms Dixon, who now has the power to issue fines against tech giants for privacy breaches after European Union laws were upgraded last year, is investigating Facebook for seven different alleged data breaches. This includes its part in the Cambridge Analytics scandal over the use of private data in the political arena.

“The evidence that we obtained from the Six4Three court documents indicates that Facebook was willing to over-ride its users’ privacy settings in order to transfer data to some app developers, to charge high prices in advertising to some developers for the exchange of that data, and to starve some developers – such as Six4Three – of that data, thereby causing them to lose their business,” the UK parliament committee found.

The committee has only ever released excerpts of the Six4Three messages, but over the weekend, unredacted copies appeared to have been leaked online to GitHub.

Facebook Ireland declined to comment, although its UK office said this weekend the Six4Three documents were “cherry-picked and released in violation of a court order last year”.

One thread of messages appears to show that the social media giant once feared Mr Zuckerberg had almost accidentally revealed Facebook’s financial results early, due to an issue with access granted to a third-party app.

The issue could have been “near-fatal for Facebook Platform/Login/etc” wrote its vice-president, Michael Vernal.

“If Mark had accidentally disclosed earnings ahead of time because a platform app violated his privacy … literally, that would have basically been fatal for Login/Open Graph/etc.”

Mr Vernal continued: “Listen guys/gals – DO NOT REPEAT THIS STORY OFF OF THIS THREAD. I’m super, super serious here. I want us to follow up on this and respond urgently here, but I also do not want this story spreading inside of Facebook or off of this thread at all. I can’t tell you how terrible this would have been for all of us had this not been caught quickly.”