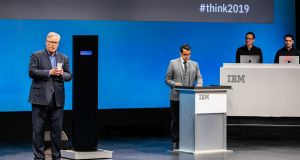 In a world first last week, the first ever live debate between an AI and a human was held: IBM’s Project Debater was pitted against debate champion Harish Natarajan on the topic of state funding for preschools. Natarajan won but Project Debater put up a good fight and showed how far AI has come in terms of detecting, sorting and organising logical arguments.

This unique debate was organised by non-profit organisation Intelligence Squared US in partnership with IBM so it was designed to showcase how far this tech has come since the Watson supercomputer won at the Jeopardy! Quiz show back in 2011.

Both the AI and the human debater were given a short amount of time to prepare their arguments and not allowed internet access. While Project Debaters arguments were not as sophisticated as Natarajan it could well have trounced the average human.

Several layers of AI running concurrently worked to understand the topic and position it was asked to take, what existing arguments it could use, and what facts would back these up. The AI also had to “listen” to Natarajan’s argument before preparing a sensible rebuttal and a final statement, something many a politician would struggle with.