Irish companies out in force at Mobile World Congress 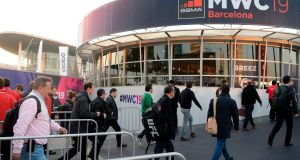 Irish companies are out in force at Mobile World Congress, which officially kicked off in Barcelona on Monday.

Some 22 Enterprise Ireland client companies are showcasing at the event, the largest annual global gathering for the mobile industry.

The annual shindig officially commences today but a number of leading mobile manufacturers, including Huawei and HMD/Nokia, have already showcased their latest devices They were joined by Sony, which unveiled its new flagship Xperia 1 at a press event early on Monday morning.

Mobile World Congress, which is now officially known as MWC Barcelona, was established in 1987. This year’s event is expected to attract 107,000 attendees and more than 2,400 companies.

Among the Irish companies taking part at this year’s event is Zyalin, the company behind internet safety tool, iKydz. It announced deals with five different providers across Japan, Ghana and Lebanon.

Cubic Telecom, the fast-growing Irish technology company whose backers include chipmaker Qualcomm and car manufacturer Audi, used MWC to announced a new collaboration with Microsoft. Cubic is to work with the tech giant on its connected vehicle platform, a set of services built on the Microsoft Azure cloud that are designed to help manufacturers create better connected driving experiences.

Asavie, a provider of internet of things (IoT) solutions, also announced that it connect service is now available on AWS marketplace and via Verizon.

A number of companies will also have their owns booths, including Asavie, Ding, Openet, Taoglas and Alpha. IDA Ireland will also be present at the event.

“The Enterprise Ireland-backed Irish companies exhibiting at MWC19 Barcelona are providing cutting-edge and innovative solutions to various issues being faced by businesses and consumers. Each of the companies will be showcasing the best aspects of Ireland’s mobile technology industry, which is held in high regard globally,” said Minister of State with responsibility for Digital Development, Seán Canney.