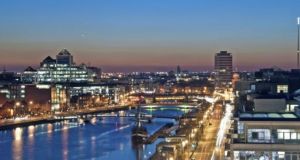 The Republic of Ireland has fallen four places to 18th spot in an international ranking of the best countries for start-ups, with Dublin dropping out of the top 50 cities.

The rankings were compiled by StartupBlink using algorithms that analyse thousands of data points on early-stage companies, accelerators and co-working spaces to rank 1,000 cities and 100 countries in terms of their start-up ecosystems.

The Swiss-Israeli company, which has developed an online global start-up map, also uses data collated by research platforms such as Crunchbase.

According to the Start-up Ecosystem Rankings, Dublin is the only Irish city to feature in the top 300 cities. The capital fell 10 places this year to 54th spot. Galway was the second-highest Irish city, although it fell 86 places to 313.

Regionally, Ireland ranks in 12th place for Europe, with the capital coming in 13th place.

Separately, Belfast was ranked in 174th spot globally, up 83 places compared with last year and was deemed the seventh best place in the UK for start-ups.

The report’s authors cited a number of factors for the relatively poor showing for the Republic in its rankings. These include the presence of all the leading tech giants here which, they said, discouraged people from starting their own companies. They also said that many of those that do often leave here to achieve success, citing as an example the Collison brothers, founders of the tech unicorn Stripe.

“Ireland’s potential has yet to be realised in full, and talented Irish founders still choose to relocate and establish their start-ups in more prominent ecosystems.

“The lack of allure to stay and scale start-ups in the Irish ecosystem is resulting in a lack of unicorns, which in turn results in a low level of investment,” the authors said.

1 My aunt never told us that Gran passed away with no will
2 Ryanair to slash 1,000 flights from August and September schedules
3 Green Party TD queries ‘usefulness’ of another appeal in €13bn Apple tax case
4 The $6bn judgment pitting Nigeria against Irish businessmen
5 Government to push through €2bn credit guarantee scheme next week
Real news has value SUBSCRIBE