Expansion, which is being led by Dublin office, means company now in 39 countries 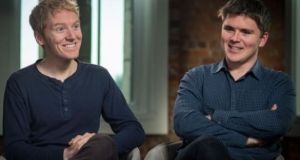 Online payments company Stripe has officially launched in five new European countries in an operation spearheaded by its Dublin office.

The company, founded by Limerick-born brothers Patrick and John Collison, is officially launching in the Czech Republic, Romania, Bulgaria, Cyprus, and Malta. The move brings to the number of countries in which Stripe operates to 39, of which 29 are in Europe.

Companies in the five new markets now have access to Stripe’s entire product range to launch, run, and scale their business globally. These solutions include Stripe Connect for running multi-sided marketplaces, Billing for subscriptions and recurring payments, Radar for fraud detection and prevention and Sigma for analytics.

Stripe said the expansion was due in part to the accelerated shift from offline to online that has arisen from the Covid-19 crisis.

This it said has made the need for financial infrastructure and accessibility more apparent than ever.

“We are excited about bringing Stripe to even more European countries, making payment acceptance and money movement faster and less complicated for everyone. We are nearing our goal of making Stripe universally available to businesses across the continent,” said Matt Henderson, the company’s business lead for Europe, Middle East, and Africa (EMEA).

Stripe last month raised an additional $600 million (€546 million) from backers in a move that valued the company at nearly $36 billion.

Launched in 2010, Stripe’s technology handles hundreds of billions of dollars in transactions each year and counts the likes of Amazon, Uber, Booking. com, Deliveroo, Google and Zoom among its customers.

Stripe employs more than 2,500 people in total, including more than 300 in Ireland. It set up an international engineering hub – its first outside of the US – in Dublin in early 2018.