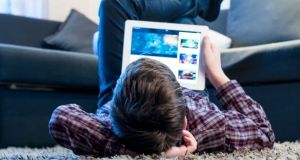 Children are estimated to account for 40 per cent of all new internet users.

The London-headquartered business described the partnership as a huge milestone in ensuring digital privacy for young people.

“For WPP to be embracing kidtech this way is setting a standard for kidsafe advertising beyond where many of the big technology companies have gone,” Mr Collins told The Irish Times.

SuperAwesome, whose backers include Microsoft, has developed a kid-safe marketing platform that operates as a bridge for brands to reach those aged between six and 16. It includes a number of channels across physical, digital and mobile, including its “Instagram for Kids” app, PopJam. Partners include the likes of Lego, Mattel, Hasbro and Nintendo.

The new partnership is seen to mark a big shift away from content owners thinking about privacy compliance to advertisers also taking a keen interest.

While children are estimated to account for 40 per cent of all new internet users, legislation to protect children online has lagged. With children increasingly going online during the coronavirus pandemic however, regulators across the world are stepping up their oversight of privacy violations.

Under the agreement, all of SuperAwesome’s kidtech tools and products – which ensure greater digital privacy – will be available to WPP agencies globally so that they can provide it to their clients.

In addition, WPP will roll-out SuperAwesome’s KidAware certification programme so that all its agencies will be trained in ensuring any online engagement they are involved in complies with the latest privacy legislation and advertising standards.

“WPP’s partnership with SuperAwesome is part of our commitment to ensure children’s safety while engaging with content online. It sets the first benchmark for digital privacy for children and provides our clients with access to industry-leading strategies and the latest privacy-by-design technology for the under-16 digital media space,” said Mark Read, chief executive of the agency.

Prior to establishing the company, Mr Collins founded DemonWare, which was acquired by Activision Blizzard, the video games giant behind the Call of Duty franchise. He was also behind Jolt Online Gaming which was bought by GameStop, the largest video games retailer in the world.