‘Too early’ to predict impact of Covid-19 on business 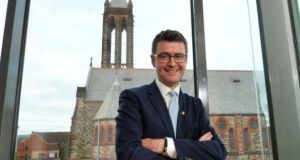 Belfast-based software company Kainos said revenue rose 18 per cent to £178.8 million in the year ended March 31st, with profit up 9 per cent over the year.

The company, which began implementing remote working for staff from March 5th, said it was too early to predict the impact of the coronavirus outbreak on its business, but said it was well positioned for future growth.

This was the 10th year in a row of growth for the company, with adjusted pre-tax profit rising to £25.5 million and strong sales continuing to underpin further revenue growth.

More than half Kainos’s revenue comes from public sector customers.

Kainos reported solid revenue growth in digital services, up 4 per cent to £122.5 million, an increase of 69 per cent in its smart revenues to £19.1 million, and strong growth in its Workday Practice, which rose 66 per cent to £56.3 million.

The period also saw the acquisitions of Formulate in the UK, US-based IntuitiveTEK and Germany’s Implexa, contributing £1.1 million of revenue. Research and development expenditure fell to £3.9 million from £4.9 million a year earlier.

“While not having a significant impact on FY20, during March 2020 we started to see the impact of the Coronavirus pandemic on the global economy,” chief exectuive Brendan Mooney said. “ It is too early to predict the duration or the severity of the economic disruption and the impact it will have on our customers. We maintain confidence in our strategy and believe that we have reacted to the uncertainty of the current situation swiftly and prudently, leaving us well positioned when the economic impacts of the coronavirus on the broader economy begin to recede.”

The company has cut costs, curtailing bonus schemes, placing staff on furlough and deferring investment on its planned new office in Belfast. Its chief executive, chief financial officer and senior vice-president of business development said in April they would take no salary or bonus for six months, while the rest of the executive team are taking a 50 per cent pay cut and non-executive board members have cut their fees by 20 per cent.