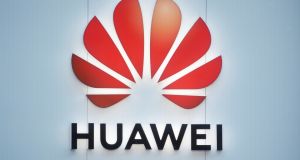 The logo of Huawei as seen in Davos, Switzerland. Photograph: REUTERS/Arnd Wiegmann 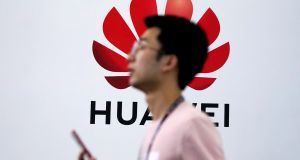 China’s Huawei Technologies has asked Samsung Electronics and SK Hynix for a stable memory chip supply despite apparently mounting pressure from the US to isolate the Chinese telecommunications company, the Korea Economic Daily reported.

The Shenzhen-based company called in senior officials at the two South Korean chipmakers’ Chinese units to request a stable supply of the chips regardless of the recent US government move, the report said, citing unidentified industry sources.

Huawei is one of the five biggest clients for Samsung and SK Hynix, spending around 10 trillion won (€7.3 billion) to buy DRAM and NAND flash memory chips from the Korean companies every year, the newspaper said.

The request comes amid rising pressure against global suppliers after US President Donald Trump barred any chipmaker using American equipment from supplying Huawei without US government approval.

While memory chip makers aren’t subject to the US government restrictions, Huawei worries that the Trump administration could widen its restrictions later, according to the report.

As the two South Korean companies supply more than 70 per cent of the DRAM memory chips globally, including them in any US action would threaten the survival of the Chinese company, said the newspaper. It cited an industry official it didn’t identify as saying that Huawei is quickly building its memory-chip inventory in preparation of a worse scenario. - Bloomberg

1 Brexit: System agreed for Irish goods to skip checks on UK trade
2 Why are markets booming when a crash is on the way?
3 David McCullagh announced as co-host of RTÉ Six One News
4 Vodafone to speed up 5G rollout using new technology
5 Power, legitimacy, urgency make potent shareholders
Real news has value SUBSCRIBE