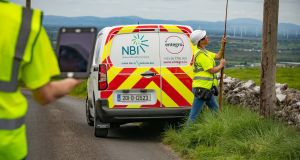 Entegro has been awarded the contract to survey and design the National Broadband Network. Photograph: Dylan Vaughan

Telecommunications firm Entegro is creating up to 50 jobs following a contract win with the State’s National Broadband Plan.

The company, which is headquartered in Kilkenny but has offices in Dublin and Athlone, will survey and design fibre optic networks across the Republic as part of the roll-out of the plan to bring high-speed internet access to more remote parts of the country.

The €3 billion plan is being delivered by National Broadband Ireland, with Entegro playing a key role in helping to deliver the project.

The company has substantial experience across the Republic, the UK, Europe and US in telecommunications technology, designing and deploying gigabit networks.

Work has begun in Carlow, with Tipperary next on the list. The Entegro team will survey locations nationwide.

Jim Doyle, managing director of Entegro, compared the broadband plan to the rural electrification of Ireland.

“There is not one home, family, business or community in rural Ireland that will not benefit from being connected to this fibre network.,” he said.

“We look forward to the challenge, and to playing our part in the development and delivery of such a critical infrastructure project, that will be vital in Ireland’s future prosperity and growth.”

The National Broadband Plan is expected to take up to seven years to complete, although the majority of homes will have access to the new network within the first three years.