Caveat: Nobody needs a law to turn off their smartphone. We can all take action 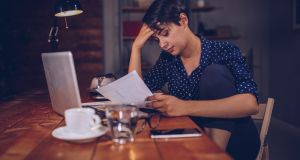 Managers only send out-of-hours emails because staff quickly answer them. We do this because we’re never off the damned devices

Smartphones are a dumb distraction. Most of us have been there: it’s out of hours, you’re at home with your family, but you can’t help checking work emails. Invariably one or two require attention. Sod it. You reply. You may as well be at work. Replying could mean checking a few files first and mulling the issues over in your mind.

The campaign to have the “right to disconnect” enshrined in law is gathering pace. Led principally by the bankers’ trade union, the Financial Services Union (FSU), the campaign seeks legislation regulating excessive out-of-hours contact between employers and staff via email, messaging app or phone.

Last week the FSU launched a petition to put extra pressure on the Government to draft the new laws. Heather Humphreys, the Minister for Business, has corresponded positively with the union on the issue, and has attended its events. Her department is due to publish a review on the matter shortly, which will set out regulatory options.

There isn’t much complaint from employers about the campaign. The Government may be flirting with the idea of a charter rather than a law, but, overall, there is little establishment pushback against this zeitgeist-capturing drive for workers’ digital rights.

Given the fact that 60 per cent of its members surveyed engage in out-of-hours work contact, what the FSU seeks is quite reasonable. But it is not a silver bullet.

A culture of excessive out-of-hours emails and texts causes “techno-stress”, the union argues. It certainly contributes to the stress. But we create most of it ourselves through our addiction to smartphones. That is the real cause of much modern anxiety.

Managers only send out-of-hours emails because staff quickly answer them. We do this because we’re never off the damned devices. People won’t feel any less anxious in the evenings if the time spent replying to work emails is replaced by more mindless scrolling through social media apps, which for many people is no less stressful. Being harangued by strangers, or watching them harangue each other, is rarely positive.

So it isn’t just the work emails that are the problem. It is this acquired impulse within us to respond. When we come in from work we ought to fling the devices on to the mantlepiece alongside the car keys, and leave them there until the morning. But we don’t because we’re hooked.

The FSU launched its petition as part of a similar campaign by the UNI Global Union umbrella group, which has links in 150 countries. It claims the debate is the modern equivalent of the fight for an eight-hour working day, which took off in earnest in the 19th century. The drive for a legal “right to disconnect” went truly global in 2019.

Maltese politicians are pushing for new rules there. Italy and Spain brought in restrictions earlier this year. A bill has been published in India. Restrictions have been proposed by local politicians in New York. But the standard bearer is France, which is widely hailed for being the first to legislate for the “right to disconnect” in 2017.

There is a tradition of using blunt legal measures in France to try to raise the lot of workers, but this is not one of them. The French laws are more nuanced and flexible than some of the global campaign’s proponents might have you believe.

There is no blanket ban on after-hours contact in France, or anything like it. Instead the laws brought in by former labour minister Myriam El Khomri introduce a right to disconnect, but do not define it, leaving the nitty-gritty detail of what is appropriate to be worked out by way of conduct charters in each company.

In smaller entities the charter is essentially dictated by the employer. Large employers with more than 50 staff are obliged to negotiate the detail of the charter with workers’ representatives, but there is no legal requirement to reach an agreement. Both sides are expected to work it out eventually.

In practice, the French rules kick legal responsibility for the issue on to local collective bargaining procedures. This may help to explain some of the enthusiasm of unions in many other countries, including Ireland, for the French approach. It appears to clearly buttress the formal role of trade unions in local decision-making, something that is always coveted by trade unions here.

That some managers think it is okay to text or email staff at 10 o’clock at night is a problem in our culture of work. Laws may be helpful in discouraging harmful behaviour but laws alone never change a culture. Only people can do that, by voluntarily moderating their own behaviours. We already have that power.

The real trouble arrives when employers penalise staff for not engaging with out-of-hours contact. There are already legal rules to deal with that. Kepak was last year ordered to pay €7,500 to an executive who felt harassed by constant evening emails.

While we wait around for the legal right to disconnect, why not go ahead and do it ourselves? Nobody needs a law to turn off their smartphone. You might need treatment from an addiction counsellor. But not legislation.

Fling the thing in a drawer. Lock your phone in the shed if you must. And read a book instead of your inbox.

– One of my favourite pieces of Brexit analysis so far was published this week in the Yorkshire Post by an English Liberal Democrat peer and academic, whose past doctoral students include Olli Rehn, the EU’s economics commissioner during the Irish bailout.

The piece laments the expected increase in paperwork for British companies that trade across borders. It also highlights the opposition of most businesses in Northern Ireland to Brexit, and warns Britain against isolating itself from its neighbours. So far, so orthodox.

Then the article warns that the rise of English nationalism could lead to the break-up of the UK, leaving behind a snarling, angry England. In this scenario, the author warns, he may move to Scotland. He’d fit right in. The Englishman’s name is William Wallace. They may take our EU citizenship. But they will never take our freedom.

– Accounts have been filed for the Slieve Russell hotel in Co Cavan, formerly owned by Sean Quinn but now controlled by the KPMG liquidators of IBRC. The business appears to be performing reasonably well on the face of it, almost quadrupling its profits in 2018.

The hotel’s sales remained steady at about €14.6 million. Its profits of €2.75 million compared favourably with the prior year. But much of the boost was down to the reversal on paper of a previous €2.3 million impairment charge on the property.

Irish Times reporter Simon Carswell recently reported that Quinn asked to meet KPMG-installed directors of the hotel to inquire if he could become involved in it again. He is thought to have an emotional attachment to the property for symbolic reasons, as it sits virtually next door to his home.

A note to the hotel’s accounts suggests that it could be put up for sale before the end of 2021. Let’s see if Quinn, who was declared bankrupt in 2012, tries to bid.