With numerous studio spaces closing down in recent years artists living and working in Dublin say that it is increasingly difficult to earn a living in the city. Video: Enda O'Dowd 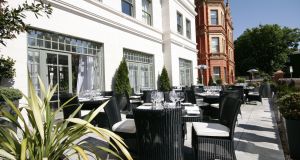 The Dylan Hotel in Dublin. “New hotels facilitate the expansion of the tourism industry, one of the purest export industries we have.”

Hotels are in the dog house in Dublin. The city’s councillors have decided to limit their development in a populist vote called on the back of the closure of a well-liked alternative pub, which is due to make way for a new hotel.

Many artists are loudly blaming new hotels for the apparent death of culture by squeezing out creative spaces. “No more hotels” is visible in street art and graffiti around the city.

It’s all rather breathless and short-sighted. Listening to some of the sector’s critics, you’d think paradise had been paved to put up a hotel parking lot. The truth is that new hotels are good for local communities, especially in working-class areas.

New hotels facilitate the expansion of the tourism industry, one of the purest export industries we have. Hotels are also labour intensive, diverting jobs to areas, often in the inner city, that still need them. They are catalysts for the regeneration of run-down districts. Hotels and other businesses in the wider hospitality industry are also a ready-made source of jobs for people who do not have third-level educations.

Some people sneer at those jobs. But the ones doing the sneering are usually those who can afford to. Hotel jobs are a vital part of the employment spectrum for students, immigrants, women, the less-qualified and other segments of society.

The crowd-pleasing campaign against hotels, led mostly by the councillors on the political left who voted this week to curb development, will do certain city communities harm in the long run. Then again, perhaps we shouldn’t be surprised to see politicians valuing short-term reactive thinking ahead of long-term planning.

The negative effects on communities of anti-hotel moves can be seen in Dublin’s north inner city today. A year ago this month, a cadre of councillors voted to halt the €14.5 million sale by the city of an old Magdalene laundry site on Seán McDermott Street to a Japanese hotel chain, which had €50 million more to invest.

Toyoko Inn wanted to build a 350-bedroom hotel on a two-acre site right in the heart of one of the most economically and socially-deprived areas of the city, ground zero for Dublin’s drug-fuelled gang wars. Its proposal also included retail units, student accommodation and potentially up to 60 social housing units. Planners viewed it as a “once-in-a-lifetime” opportunity to spark economic regeneration in the area.

Opponents, marshalled by Social Democrat councillor Gary Gannon, argued that the proposal betrayed the memory of women who were victims of cruelty in Magdalene laundries and State institutions. There was to have been a memorial embedded in the redevelopment scheme, but this was not enough for the critics.

Twelve months on, we’ve had enough time to form a proper perspective. What good did the move achieve? There was talk recently of developing a “site of conscience” or memorial in place of the Magdalene laundry. I asked Dublin City Council this week how that scheme is coming along. It replied that there are “currently no plans” to develop the site and “no plans” for a museum.

“In due course there will be discussions with councillors on the suggestion of ‘a site of conscience’ but at this stage there are no proposals on the table and the whole issue of funding for whatever goes on the site will require major consideration,” it replied.

So the site remains derelict with no workable plan for its development and no funding to build it out, anyway.

Meanwhile, a separate development has been allowed by the same council on another Magdalene laundry, this time in leafy Donnybrook.

What bounty did stymieing the hotel developers bring for the people who live around Sean McDermott Street? The hotel would have brought 100 permanent jobs and 600 temporary construction jobs into the north inner city.

What jobs have the blockers brought to the area to replace the ones they kiboshed? Incidentally, Toyoko Inn hires women to manage more than 90 per cent of its hotels.

The vote to block it achieved nothing except to raise the public profile of a councillor or two. What a paltry return for the people of the city.

New hotel developments are often easy targets for people who are, in reality, angry about other things. Well-known urban artist Will St Leger was interviewed by The Irish Times last week over the cost of city living and how this is crimping spaces for creative work. He blamed the development of hotels, and said the tourists they accommodate “don’t contribute to the culture and creative richness” of the city, which is a slightly one-eyed way to view an influx of curious people from other cultures.

Many people will still identify with St Leger’s pain. Major elements of the overall cost of living have been under control in our low-inflationary environment for several years now – food and clothing costs have been fairly static, although transport costs have risen somewhat. The soaring cost of housing, however, is the damaging outlier.

It is easy to arrow the blame for this at tourists. Most of us tut tut at tourists from time to time – it’s part of living a busy city life. But they didn’t create the housing shortage. Bust developers, bust banks and a decrepit Government spatial policy did that.

The strains of more tourists and new hotels are just a symptom of a peaking economic cycle. Don’t be so quick to trash them. We will miss them when they’re gone.

– The Nigerian government appears finally to have got its act together. It is fighting back, hard, in the $9.6 billion battle against Irish-run Petroleum and Industrial Development (P&ID), which recently won the huge judgment against it in a UK arbitration court over a failed 2010 Nigerian public-private gas deal. The huge award shocked the country’s citizens, politicians, lenders and most observers.

On Thursday, Nigeria won leave in a London court to appeal the judgment, although the stay on the implementation of the order is what the African state really needed to get a foothold in the row, which potentially threatens a fifth of its foreign reserves. As it stands, the government will have to pay $200 million to the British court within 60 days to secure the continuing stay.

The US hedge fund-backed P&ID’s Irish links are now coming under serious pressure. Nigerian investigators looking into the original deal have detained Lagos-based Irishman James Nolan, a close business associate of one of the founders of P&ID, the late showbands manager and Dublin businessman Mick Quinn.

Nolan has not been charged with any crime, but his detention will put pressure on the people around P&ID. It also puts pressure on the Irish Government, which will obviously have to provide him with consular assistance but which is understandably wary about being dragged into the row with Africa’s largest economy.

Nigeria has also claimed it will seek the extradition of the other Irish P&ID co-founder, Brendan Cahill, and Mr Quinn’s son, Adam, although it is not clear what the grounds for this would be.

Nigeria is also seeking access to bank records held by State-controlled bank AIB, which it wants to view as part of its investigation into the original 2010 gas deal, which fell apart, leading to the arbitration award.

P&ID indicated this week that it is ready “in good faith” to enter settlement talks: “If the Nigerian government is serious about a willingness to negotiate, we are ready.”

– More than €40,000 was raised on Wednesday evening at the Business Journalists Association of Ireland annual corporate challenge, which is in essence a grand table quiz held in aid of the Dublin Simon Community. The event at the Radisson Blu hotel in Dublin was sponsored by An Post, and overseen by PR firm the Reputations Agency.

Tables were bought for €1,000 apiece by corporates, which each then endured the ignominy of having their quiz teams handicapped with the addition of a random journalist. Law firm William Fry mounted a strong challenge for the honours, as did communications group Teneo.

However, the employers’ lobby group Ibec prevailed in the quiz, proof if ever it were needed that the bosses always win out in the end. Not even the leaden weight of an Irish Times business journalist tethered to their team could stop Ibec on the night.

1 Michael Smurfit: ‘I asked Trump to invite me to the White House for my 80th birthday’
2 Small businesses are cannon fodder in zealous anti-virus experiment
3 Lioncor gets planning permission for ‘house of Europe’ project
4 Tax and the Pandemic Unemployment Payment: Your questions answered
5 Minister calls for EU to act against tobacco firms ‘undermining’ menthol ban
6 Ryanair expects air fares to fall when flights take off again
7 Household savings soar as consumers stop spending
8 ‘I’m so lucky to be in the Caribbean – a million miles from Derry Girls’
9 Revenue fears fraudsters tapped bank details of 3,000 taxpayers
10 Consumers hesitant about travel as Covid-19 restrictions ease
Real news has value SUBSCRIBE