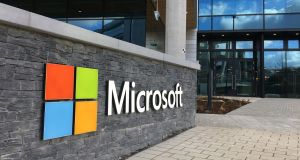 Microsoft: A key finding of the survey was a lot of companies weren’t focused on the cultural impact of technology. Photograph: Bryan O’Brien

If you want to get more out of your employees, embrace a digital culture. That’s the message from a new survey carried out by Microsoft Ireland, which found that organisations that offer a strong digital culture gained a significant competitive advantage, with increased productivity and innovation.

The survey found a low number of employees felt highly engaged with their job, at only 14 per cent.

It found 93 per cent of employees in Ireland rated their own productivity as low to average, with 84 per cent saying they were working in a weak digital culture. Sixteen per cent said they were “highly empowered”.

A digital culture is an environment where business leaders champion technology, and support technology-use to get work done in the most effective way. This can lead to a competitive advantage for companies, Microsoft Ireland’s commercial director, Aisling Curtis, said. “What we see is a real digital disconnect.”

A key finding of the survey was that a lot of companies weren’t focused on the cultural impact of technology. “A digital culture is the missing ingredient for digital transformation,” said Ms Curtis.

A poorly planned digital culture can lead to technology becoming a distraction rather than a bonus, with a lack of training in how to use new technology effectively, and a lack of support causing workers to become less productive. Workers can also suffer burnout, feeling tethered to the job and “always on” as a result of mobile devices and the ability to work from home.

A total of 1,000 employees in Ireland were interviewed for the survey. The research was part of a Europewide survey on the digital disconnect, with more than 20,000 employees across 21 EU countries.

1 How long can Government afford to keep State pension age at 66?
2 Policy failed us during the banking crisis and it’s failing us again
3 Samsung patriarch Lee Kun-hee dies at 78
4 No-deal Brexit could trigger rise in food prices, says Simon Coveney
5 In praise of Gogglebox Ireland, an essential service in all but name
Real news has value SUBSCRIBE