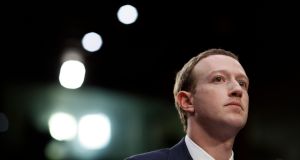 Perhaps it should have been expected with a hearing involving Facebook that not everything would be as it seemed.

As Mark Zuckerberg began his marathon sessions in the US Congress over two days, the reaction in the markets was overwhelmingly positive. Shares in the social media giant jumped 5 per cent at one point and even with a retreat from those highs, the company recorded its best one-day performance on the Nasdaq Exchange in almost two years.

The general view in the markets is that Zuckerberg handled his inquisitors well. He remained calm and measured with very few exceptions over the two days of questions. He kept the focus of his answers very tight and he batted away anything on which he was unsure for follow-up by “his people”.

Cheerleaders in the tech space were similarly upbeat, viewing the Facebook boss as the “winner” in the exchanges.

Yet it appears that in his main aim – fending off the prospect of invasive regulation – he may have failed. The second day of hearings clarified some of the major concerns of Congress – the company’s repeated inability to police itself, its lack of transparency and whether users can get more control over their data and how it is (and is not) used.

For all the generally polite exchanges in the committee room, feedback after the hearings suggest that lawmakers were not unduly impressed by the Facebook chief and his willingness to institute meaningful change at his company. That makes a move to some form of regulation down the line more likely.

It probably didn’t help that the man whose company assumes consent for the broadest use of data came across clearly as far more guarded when it came to his own personal data. Even the disclosure that his own data may have been taken in the “improper” Cambridge Analytica downloads failed to shift the perception that, where Facebook is concerned, the rules are what it says the rules are.

Appearances can be deceiving – and that’s not just limited to the booster seat that raised Mr Zuckerberg’s stature before his inquisitors.