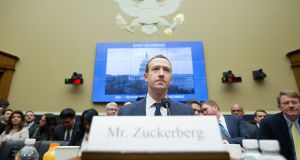 Mark Zuckerberg endured tough questioning from lawmakers in his second appearance on Capitol Hill on Wednesday as Facebook was hammered for taking a cavalier approach to consumer data.

Facebook’s founder and chief executive drew the ire of some legislators as he was unable or unwilling to answer pointed questions about the company’s business model and privacy practices, but he avoided any major mis-steps.

The hearing before the House energy committee was sparked by the leak of information on 87 million Facebook users to the research firm Cambridge Analytica. On Tuesday he emerged largely unscathed from a five-hour senate barrage.

“Facebook now has evolved to a place where you are tracking everyone. You are collecting data on just about everybody. . . I don’t think the average American really understands that.”

In another bruising exchange, Jan Schakowsky, a Democrat from Illinois, asked Mr Zuckerberg: “Who is going to protect us from Facebook?”

One several occasions an unsteady Mr Zuckerberg was interrupted by impatient lawmakers and chastised for being evasive.

Mr Zuckerberg declined to give a clear response when pressed by Frank Pallone, the top committee Democrat, to make a commitment to change all Facebook’s default settings to minimise the possible collection of personal data.

“Congressman, this is a complex issue that I think deserves more than a one word answer,” Mr Zuckerberg said. Mr Pallone replied: “That’s disappointing to me.”

Greg Walden, the Republican chair of the House commerce committee, said to the Facebook founder in his opening statement: “I think it’s time to ask whether Facebook moved too fast and broke too many things.”

Facebook shares were trading up about 1 per cent on Wednesday having risen more than 4 per cent on Tuesday during Mr Zuckerberg’s smoother Senate appearance.

Anna Eshoo, a Silicon Valley Democrat, asked Mr Zuckerberg if he was willing to change his business model to protect individual privacy. “Congresswoman, I’m not sure what that means,” Mr Zuckerberg said.

Commentators have suggested Facebook could collect less personal data on things such as what people read online, or could open up its advertising systems to public scrutiny, but at a cost to both its profits and commercial secrecy.

Mr Zuckerberg also came under fire on issues beyond data privacy, with lawmakers chastising Facebook for allegedly censoring conservative political content and allowing opioid drugs to be traded on its platform.

Diana DeGette, a Democrat from Colorado, gave Mr Zuckerberg a rough ride over what she said was as an imbalance between Facebook’s financial might and the lack of monetary penalties for privacy breaches.

Mr Zuckerberg told the committee he spends a lot of time explaining that Facebook doesn’t “sell user data to advertisers”, and the company could do that better. “I do think we can do a better job of explaining how advertising works.”

Mike Doyle, a Democratic congressman from Pennsylvania, accused Facebook of “turning a blind eye” to developers’ abuses because it was more concerned with attracting apps to its platform than protecting users.

“There is a real trust gap here. This developer data issue is just one example. Why should we trust you to follow through on these promises?” he said.

Mr Zuckerberg replied: “Respectfully I disagree with that characterisation. We’ve had a review process for apps for years.”

On Tuesday Mark Zuckerberg said he was open to the “right regulation” of Facebook but did not commit to any specifics. His disaster-free performance added more than $17 billion (€13.7bn) to the company’s market value on Tuesday and its shares rose just under 2 per cent Wednesday as the second hearing drew to a close.

Facebook shares have been battered by concern that a string of controversies could tempt Congress to introduce profit-crimping regulation.

Mr Zuckerberg told senators on Tuesday he agreed that “we have a broader responsibility than what the law requires” to police the platform. He said he was not opposed to Congress introducing new laws to govern the company, but fended off attempts to pin him down on details.

In prepared testimony Mr Zuckerberg said the company had made “mistakes” that allowed the leak of data to Cambridge Analytica, the analytics firm that worked for the Trump presidential campaign.

He also listed the series of changes that Facebook had made in the three weeks since the revelations but admitted there was “more to do”.

1 Aldi to impose limits as Christmas toys go on sale
2 Fair deal? Family at odds with hospital and each other not so sure
3 ‘I hate haggling because I hate when people do it to me’
4 Irish elearning company LearnUpon closes €47.4 million investment
5 First look: Is the iPhone 12 Pro the best smartphone out there?
Real news has value SUBSCRIBE