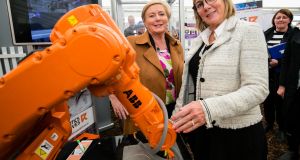 Tánaiste and Minister for Enterprise and Innovation Frances Fitzgerald with Enterprise Ireland chief executive Julie Sinnamon at the Robotics and Drives stand at the National Ploughing Championships in Offaly. Photograph: Karl Hussey/Fennells

What would you do with an extra two days off per week? This was the question posed to Irish dairy farmers this week by Dutch agri-robotics company Lely at the National Ploughing Championships in Offaly. It claims its systems, which include a futuristic automatic milking machine called the Astronaut, could knock 20 hours off the average working week of a farmer.

On Tuesday, the Lely shed was one of the busiest trade areas I visited at the event. People milled around it all day. The exhibit comprised a pen with about 20 cows who spent the day lazing around, munching fresh grass and blithely expelling methane at a fantastic rate. Every few minutes, one of them would saunter over to the Astronaut for feed.

Without human intervention, a small brush appeared beneath the animal to stimulate its udders, before the robot milked it in a flash. At the same time, it collected data on the animal’s health and the quality of the milk. The cows couldn’t have cared less.

Along with another Lely system powered by a unit hanging around the cow’s neck like a high-tech bell, the Astronaut fed its data into a web-based management system. The information was then collated on a smartphone app, where farmers can view a tailored health report on each animal. Is she in heat? Has she mastitis? Is she sick?

Each time a cow went to the Astronaut, the process was witnessed by up to a hundred people – mostly men – leaning against the fence in that way that Irish men tend to lean against things: arms folded, backside out, leg propped up against the bottom rung of the fence. They looked fierce impressed altogether.

You can forget any urban misconceptions about agriculture being a conservative, low-tech industry. Irish farming is now cutting edge.

And despite the looming threat of Brexit and the current economic difficulties of some tillage and beef farmers, confidence appears to be surging through much of the rest of the industry. A sense of elan was palpable at “the Ploughing”. Agriculture is on the march.

The huge focus on technology and innovation, including robotics and artificial intelligence (AI), was one the most striking aspects of the event. Around every corner, it seemed, there was a new high-tech offering: robot shed cleaners or feed pushers, soil monitoring devices, geo-mapping systems, drones.

I didn’t see any driverless tractors. “But they’re coming someday soon,” mused one farmer, as he sat surveying the €50 million worth of high-tech machinery plonked in one section of the sprawling festival campus.

The apparent feeling of economic confidence wasn’t confined to the industry zones. There were queues of people, for example, waiting to talk to the some of the large group of wealth management and stockbroking firms among the 1,700 exhibitors. Not all farmers are wealthy, but some of them clearly feel wealthy again.

“It’s taken a while for the recovery to ripple down to my part of the country,” said one Corkman. “But there’s no doubting it is there now.”

The Dome – the indoor retail zone – was bursting with purveyors of consumer luxury and indulgence that fare well in any vibrant economy: chocolatiers, jewellers, beauty product stalls. Outside, a garden furniture company was selling a kid’s wooden playhouse in the shape of a tractor: a snip at €4,000.

But just when you thought the Ploughing was morphing into yet another modern display of gratuitous Irish consumerism, something would pop into view to remind you that rural Ireland, thankfully, still retains its sense of idiosyncrasy.

An enthusiastic stallholder captivated his audience, mostly women, with his spiel for Coole Swan, a whiskey liqueur business that morphed out of a family farm. Where is it made, one woman asked. “’Tis made in heaven, but bottled in Cavan,” he replied.

Around the corner, sandwiched between a stall selling pet foods and another selling skincare products, there was a stall selling salvation: the Legion of Mary was handing out miraculous medals. Nearby, the Franciscans were recruiting, close to a sign that read: “God is calling you”. A man sat beneath it, talking into his mobile. Surely God wasn’t calling on a Samsung?

Clearly it’s not all milk and honey for the agriculture industry. Margins for crop farmers are wafer thin and beef farmers are also struggling to break even.

Some parts of rural Ireland, however, are faring far better than others. The undeniable buzz in the air at the Ploughing bodes well for the recovery in counties outside of the Dublin belt.

Towards the end of the day, a large crowd gathered to chat outside the Irish Farmers Association section at the heart of the campus. One of the most pressing issues for the agriculture in the upcoming budget, one of the IFA men told me, is the introduction of a new State scheme to give low-cost loans for farmers.

“Last year’s scheme was maxed out in about a month,” he told me.

But if farmers are looking for sources of capital for fresh investment, isn’t that a sure sign that confidence is once again flowing through the industry?

Friday night is Culture Night in Dublin, so a trip to see your accountant is unlikely to be top of the agenda. Consider, however, dropping down to the Pearse Street headquarters of Chartered Accountants Ireland (CAI) this evening. If you are interested in singing beancounters, it could, quite literally, be music to your ears.

The accountants have teamed up with the Sound Check exhibition from the nearby Science Gallery for a music-themed event for Culture Night. Distressed Assets, a rock band of staff members from the CAI, will be making an appearance.

There will also be a series of talks on the business of music, including from Ciarán Conroy, co-founder of music agency Milestone Management; Sarah Sweetman, finance director of the Irish Music Rights Organisation; and Eoin Connolly from Deloitte, who will discuss the potential impact of blockchain on the economics of the music industry.

There will also be talks on the accountants’ art collection, and a series of unusual instruments for children to try.

It all sounds like fun. Always be wary, however, if an accountant starts singing the blues.

Ryanair’s incredible cock-up regarding the raft of flight cancellations due to pilot rostering has left a golden opportunity for the airline to be ridiculed by its rivals. Thankfully for Michael O’Leary, Aer Lingus appeared to have pulled its punch.

Aer Lingus has launched “rescue sales”, which are obviously targeting stranded Ryanair passengers, but, beyond that, it has made little hay out of its main rival’s difficulties. Can you imagine how much O’Leary would crow if the shoe was on the other foot?

O’Leary owes Willie Walsh, chief executive of Aer Lingus parent IAG, a pint. Walsh, too, remembers what it is like to oversee an operational disaster. Remember the mess that was British Airways’ ground operations at Heathrow T5? Walsh was chief executive of BA at the time. He and O’Leary now have more in common than just a chippy approach to business.