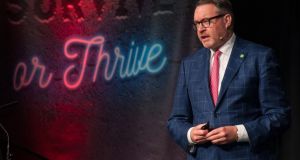 When business owners – often after years of torrid toil – cash out successfully with big payouts, what drives some of them to try it again from scratch? Is it boredom? The thrill of succeeding against all the odds? Greed? Or sheer masochism?

Kerry photographer Jerry Kennelly sold Stockbyte to Getty Images in 2006 for $135 million. By rights, he could have decamped forever to a Mediterranean yacht to live on champagne and caviar. Nobody would have blamed him.

Instead, he has spent the last decade, and a reputed €30 million, struggling to build up design outfit Tweak. He jokes that people at home in Kerry have told him that he is “too thick to stop”.

Galwayman James Murphy last month sold hair restorer Viviscal to a US company for €150 million. He says he might “buy a few things here and there” for himself with the proceeds. But he is already on the hunt for another unloved brand to “do the same job” as Viviscal all over again.

If it were I, there’s a good chance I’d still be celebrating such success by drinking tequila through a funnel at a Las Vegas casino, before retiring to a gold-plated man cave to sleep on a big pile of sweets with Shakira. But this is why Kennelly, Murphy and their ilk are multimillionaires and I will never be one.

My fascination with this mentality was piqued again on Tuesday when biscuit man Michael Carey strode on stage at the Checkout retail conference in Dublin’s Mansion House.

Carey sold Jacob Fruitfield to Valeo Foods in a 2011 deal worth an estimated €80 million. He and his wife reportedly earned €16 million for their stake, although nobody really knows for sure. He told the Mansion House crowd only that he made a return of “100 times” his original investment.

Carey has since made a few investments with the loot and is also the chairman of Bord Bia. He also writes regular columns for The Irish Times.

Not content with that lot, however, he recently launched start-up food company, East Coast Bakehouse. It raised €15 million in debt and equity and started operations in recent months baking high-end biscuits at a new factory in Drogheda.

Irish consumers munch up to €4 million of biscuits each week, but almost all of them are imported. When Carey started on the idea for East Coast in early 2015, he reckoned there was was a niche for a quality indigenous operator of scale with an eye for exports.

“[But] no battle plan ever survives contact with the enemy,” he said, quoting German military strategist Helmuth von Moltke. Brexit has already queered the pitch for his original plan to generate 80 per cent of sales from exports to the UK. East Coast must now pivot its strategy to secure more business at home but also in Europe and further afield.

When you think of a “start-up”, the stereotypical image it conjures up is of a web business wallowing in capital before its hipster founders turn a bean. For non-tech start-ups, especially large ones like East Coast Bakehouse, the reality can be different.

Carey, who pumped in a large chunk of his own cash for a 50 per cent stake, told the Checkout audience of the difficulties he faced financing the business. The search for bank funding sounded particularly torturous.

Our television screens constantly relay commercials for banks that claim to be open for business. But one institution knocked Carey back on the basis that East Coast did not have the income to service a loan. It is a start-up, Carey sighed. It needs the loan to invest so it can generate the income in the first place.

“The guy who writes the bank adverts isn’t the same guy who lends the money,” Carey quipped. He concludes that Irish banks are simply too risk averse, especially when it comes to start-ups of scale.

Eventually, Carey sealed a deal with Ulster Bank, but not before losing some of his equity investors while he waited. Enterprise Ireland also chipped in.

Carey and his management team have now set up the biggest biscuit production line in Europe in Drogheda, employing 38 people. If the plant hits full capacity, it could employ 100.

The business has eight products on the market, and Carey envisages it will hit break-even in September or October. By March, he says, its biscuits will be available in 80 per cent of Irish retail outlets, as the multiples climb aboard.

Here’s a real insight into the mentality of a start-up entrepreneur. When Carey arrived at the Mansion House on Tuesday, the conference organisers had already prepared tables around the edge of the Round Room for the first coffee break. Carey noticed the caterer was using imported biscuits.

After a quick word with the organisers, packets of East Coast Bakehouse products that had been set aside for the goodie bags were ripped open and their contents used to replace the biscuits served to the conference delegates. Serial business starters: they’re always on, never satisfied.

Colm Nagle, long-serving chief financial officer of department store chain Heatons, has quit the group. The departure comes amid an overall boardroom shake-up as Mike Ashley cements his grip on the company after his Sports Direct took full control.

Companies Registration Office filings show Nagle, a former partner at BDO, resigned from the board of a group entity, Heatons Stores, shortly before Christmas. He has since set up a consultancy, Colna Consulting. His LinkedIn page says his new venture gives advice on issues including how “to manage relationships with and between stakeholders and I have also worked with companies to successfully resolve shareholder disputes”.

That is presumably a reference to a blazing and complex row between Ashley and his then Heatons co-investors that a High Court judge in 2015 said was “worthy of a Jeffrey Archer novel”.

Ashley has appointed several buying directors from the UK Sports Direct group to the boards of various Heatons subsidiaries. He has also resigned from the board of Warrnambool, a Heatons holding company, although he remains on the board of a linked firm. It is only a matter of weeks until Sports Direct opens its first Dublin megastore, on the site of the old Boyers department store that he bought last summer. It appears this could be co-located with a branch of USC, Sports Direct’s youth-focused fashion chain.

Victoria Bonya, a Russian supermodel and the daughter-in-law of Michael Smurfit, appears to have caused a bit of a ruckus in Dubai recently, according to multiple reports.

Bonya, who is married to Smurfit’s son and heir Alex, was part of a group of Russian models who raised the ire of management at the Waldorf Astoria Dubai Palm Jumeirah luxury hotel.

The models posed for a series of revealing snaps at the property, that were then posted online and geotagged to the hotel. Dubai is a conservative spot, and the hotel’s management complained the pictures of the women were offensive.

So how did the models respond? Bonya and her friends posed again this week, this time for a “sexy mannequin challenge” while draped across the bonnets of luxury cars parked in the hotel’s forecourt. The shots were filmed from a drone.

I bet Bonya’s notoriously stubborn father-in-law smiled at her chutzpah.

1 Fianna Fáil may have just pressed the pause button on the property market
2 Who are Ireland’s 17 billionaires?
3 Saudi prince’s WhatsApp account ‘directly involved’ in Bezos hack
4 Are there annual limits on inheritances or gifts to a child?
5 My father in a nursing home wants to gift me his house
Real news has value SUBSCRIBE