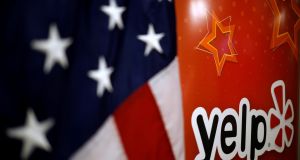 Stoppelman pulled the plug on the future of its Dublin operation in a conference call with institutional analysts. He rattled it off like he was reading the ingredients off a box of wholegrain wheat snacks. Photograph: Jim Young/Reuters

To yelp is to cry out or bark, usually in pain. And so it must have felt on Wednesday for the near 100 employees at the Dublin office of Yelp. com, the online business review site, as they found out they would bear the brunt of its job cutbacks.

Yelp is one of those irritating US tech companies that likes to present itself more like a social club than an employer. You know the sort: bean bags in the office, free snacks, socks optional at work, skinny jeans mandatory.

But when it comes to swinging the axe, the mask sometimes slips with the leaders of these cuddly Californian web companies often showing themselves to be orthodox, ruthless corporate automatons. Same as all the rest. There is no high-fiving when they are slinging you out the door with your P45.

Yelp was co-founded in 2004 by its chief executive Jeremy Stoppelman, a software engineer and one of the so-called “Paypal mafia” – early Paypal executives who mostly went on to greater things. Stoppelman brought Yelp public in 2012. He’s worth a few bob, as you’d expect: more than $220 million at the last count.

Stoppelman met Enda Kenny in San Francisco in 2014 to announce Yelp was opening a European headquarters in Dublin, creating 100 jobs. He gave it all the usual platitudes: “Ireland offers us fantastic access to multiple language capabilities from a tech savvy and educated population, not to mention a country that has proven to be a home-away-from-home . . . a landmark moment.”

A little over two years later, on Wednesday, Stoppelman pulled the plug on the future of its Dublin operation in a conference call with institutional analysts. It was less of a landmark moment, however. He rattled it off like he was reading the ingredients off a box of wholegrain wheat snacks.

Yelp’s net income was up 30 per cent in Q3, but Stoppelman explained it is abandoning its international expansion to focus on opportunities in the US. Its 175 sales and marketing jobs outside the US are being “wound down”, Yelp said, although it is keeping engineering teams in London and Hamburg.

Almost everyone at Yelp in Dublin is engaged in sales and marketing.

“This was not an easy decision,” said Stoppelman, not exactly dripping with empathy. If you think it was hard for you, Jeremy, try being on the receiving end of a sacking. It sucks a lot harder for the vanquished.

“While they perform their jobs admirably, our strategy has not panned out. I’d like to express my deepest appreciation for all their hard work and dedication.”

And that was that. A 57-minute conference call, and Stoppelman couldn’t even bring himself to mention the word “Dublin” once. He didn’t even clarify that its European headquarters was affected. Maybe it wasn’t important to him. And why would it be? Business is business. Especially if it’s Web 2.0 business.

Whatever way it broke the news internally to its Dublin employees, Yelp had virtually no public communications strategy to explain the details of its about turn in Ireland just two years after its “landmark moment”.

All attempts to seek clarity were met with a corporate wall. Yelp was reluctant to say anything. The news was well received by investors, however. Yelp’s stock soared in New York, unlike, presumably, the spirits of the affected staff.

Businesses make cuts and staff lose their jobs all the time. It is part and parcel of the foreign direct investment game. But the companies involved are usually a tad more sensitive about it than Yelp, especially when it is such a surprise move.

Stoppelman will no doubt move on quickly. It’s his birthday next week and he may have a party to plan. A five-star affair, perhaps?

But the Yelp founder definitely gets a one-star review for his aloof approach to sacking employees.

- What effect will Brexit have on the Government’s much-vaunted new regime for alcohol sales? Will the Public Health (Alcohol) Bill, and its central tenet of minimum booze pricing, survive the convoys of southern shoppers now crossing the Border to fill their cars with cheap slabs of pale ale and bitter?

When the proposed new law was drafted last year, Brexit was but a glint in the swivelling eyes of Ukip loon Nigel Farage. Since then, however, the unthinkable has happened, the UK wants out and sterling has crashed.

The regulatory impact assessment for the proposed law, drafted last year, noted that “concerns have been raised that the introduction of Minimum Unit Pricing will result in a rise in cross-Border shopping and a subsequent loss of revenue to retailers and a reduction in VAT and excise returns to the exchequer”.

The Government dismissed the concerns, however, on the basis that most cross-Border shoppers don’t buy booze.

“In addition, anecdotal evidence has shown that, due to the weakening of euro against sterling, this trade has reduced and there are indications of cross-Border trade in the opposite direction.”

The pint is firmly in the other hand now. Sterling is down, the North is relatively cheap once again, and the booze cruise up the M1 is back in fashion.

The last time shoppers flooded north to stock up on cheap flagons, in 2009, the then finance minister Brian Lenihan cut alcohol duty to stem the flow. Michael Noonan is unlikely to cut duty this time, and nor should he.

But is a weak minority Government capable of steering statutory price increases for drink through the Dáil as the retail sector along the Border struggles with effects of Brexit and a stronger euro? In the face of an industry revolt?

Drink industry critics should keep their champagne on ice for now.