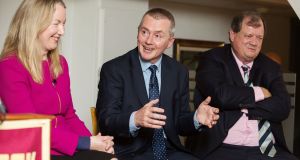 One advantage of being a nation of emigrants is that Ireland has a ready-made, extensive business diaspora, a network in every developed nation on Earth.

If Goldman Sachs is (hat tip, Rolling Stone) the vampire squid of global commerce, Ireland is the friendly leprechaun squid, green tentacles jammed down every possible orifice as quick as you can say Top o’ the morning. It is an economic resource as valuable to this State as the workforce, the infrastructure, or the undimmed talent for diddling the global tax system while acting all innocent.

In this armoury of foreign linkages, the undisputed Gustav has to be Ireland’s truly awesome business network in the United States. There are Irish surnames in every boardroom in corporate America and, boy, doesn’t the business community over here milk those connections for every drop of worth. Quite right, too.

The Irish-US network’s power was on full display on Wednesday in the bowels of the Merrion Hotel in Dublin, where Boston College launched its Ireland Business Council, a transatlantic trade networking group. It is operating in conjunction with Irish-based trade promotion collective “Ireland, Gateway to Europe”, led by Sigmar founder Robert Mac Giolla Phádraig.

Chaired by Neil Naughton of Glen Dimplex, the council will arrange two high-level business networking events events annually for the next three years, at least.

Former taoiseach Enda Kenny was supposed to launch the initiative in Boston in March as part of his long goodbye tour. However, a blizzard meant he was whisked by secret service agents back to Washington, to ensure he made his date to present the bowl of shamrock to Donald Trump at the White House.

It was rescheduled for Wednesday in Dublin. Minister for Finance Paschal Donohoe, businessman Denis O’Brien, Ardagh chairman Paul Coulson and IAG’s Willie Walsh were among the homegrown big guns roaming the room among the US visitors.

There was was standing room only down the back by the time O’Brien and a few others, arrived just in time for Donohoe’s speech.

The Minister, as you might expect him to, laid it on thick for his hosts. He correctly lauded the Irish diaspora in the US for rallying to the cause when our economy was in the toilet a couple of years back. But he also stressed another, less appreciated dimension to the Irish-US economic relationship: Irish companies in the US employ almost as many people there as US companies do here.

Donohoe then delivered a wee rebuke to the protectionist Trump without mentioning him by name: “Countries such as ours need to make the case, loudly, for the benefits of global trade. The lack of it impoverishes countries,” he said.

Trump won’t listen, but so what? The extensive reach of the Irish-US business network means the Government’s message on trade will quickly filter back to where it really counts – not the White House, but major US boardrooms.

Donohoe then made his way for the door – he was collared en route for a quiet word with O’Brien – before the main event: a fascinating panel discussion on leadership and trade with the normally media-shy Coulson, the never media-shy Walsh, and Siobhán Talbot, managing director of Glanbia.

Mac Giolla Phádraig ran the discussion, opening with a quickfire question for the three to name the Irish business person they most admired. Talbot named Horace Plunkett, who pioneered agri co-ops more than a century ago. Coulson plumped for Tony Ryan, while Walsh, after a few seconds of thought, said he most admired his aviation industry rival Michael O’Leary.

All three described their own leadership styles, before the talk turned to their biggest mistakes. Walsh, squirming slightly, reminisced about the fiasco surrounding the botched opening of Terminal 5 at Heathrow, which could have cost him his job running British Airways nine years ago.

“I was in work from 4am on the morning at the opening. I had to go home at 4pm, because I was just being unhelpful,” he said.

The discussion then moved to whether being Irish is an advantage in international business. Walsh agreed it “has definitely helped”, especially when it came to managing the tie-up of BA with Iberia to form IAG.

“When you put the British and the Spanish together in a room, you should see what happens,” he joked.

Walsh mused that, despite all that has happened, he believes the same result would transpire if the vote were held again in the morning. Coulson, meanwhile, launched a stinging attack on the UK’s body politic over the whole affair.

“When David Cameron put Brexit to a plebiscite without investigating the consequences, it was the single greatest act of misgovernance of this generation,” he said, clearly roused.

“The UK had no regard for relationships in Ireland or Europe when they had that vote. I was actually born in the UK, but some of these people have no respect for history.”

Coulson recounted how he was recently invited to a showing of Hamlet by Selfridge’s, an association he blamed on his wife’s shopping habits. He met former UK chancellor George Osborne during the interval.

“I asked him how he was getting on editing the Evening Standard. He replied that he was enjoying trying to save the British people from Brexit.”

Oh, the irony. Osborne, of course, was Cameron’s sidekick, and hence part of the four-legged double act who helped inflict Brexit on the rest of us.

“I thought to myself, holy God,” said Coulson.

He could easily have been speaking for the Irish State. And in a way, via Ireland’s sprawling global business network, he was.

Meanwhile, Denis O’Brien has been spotted all over Dublin in the last week or so. They must be missing him in Malta.

Last Friday, the same day he lost his appeal in the Red Flag case, he showed up at an intimate dinner upstairs in Peter Caviston’s fish shop and restaurant in Glasthule, to mark its 50th anniversary.

O’Brien arrived straight from the court. The lunch, as these things tend to do, ran on a bit and, at about 5.30pm, some of the dozen or so who attended retired to Fitzgerald’s nearby for a pint. O’Brien was invited along but he demurred, saying he was going to walk home instead.

He then went to the boot of his waiting limousine, plucked his trainers out of the boot, and ran home to Ballsbridge while still kitted out in his finery. That’s a fair old distance for a jog, especially when you’re wearing a suit.

At least he had plenty of things to occupy his mind as he ran. As well as the Red Flag case, it was also the day after Robert Pitt departed Independent News & Media, after tangling with O’Brien’s ally Leslie Buckley, and the same day that Michael Doorly was announced as the interim replacement.

Meanwhile, today O’Brien (a High School graduate) is pencilled in to give an address at a Clongowes Wood College past pupils’ lunch, which is a bit like asking Kenny Dalglish to give a talk to a Man Utd supporters’ club.

Speaking of businessmen and their private schooling. . . On Wednesday this week, INM officially announced Doorly’s appointment to the stock exchange. Except this time, there was no mention of him being the interim chief executive. The former company secretary has got the gig on a permanent basis.

1 State’s biggest landlord records 30% rise in rental income
2 What will the office market look like after the great remote working experiment?
3 Irish tourism must also help itself to survive the pandemic
4 Facebook agrees Irish wind farm deal with Brookfield
5 Trump signs executive orders banning TikTok and WeChat
6 ‘Saudi Arabia is where the opportunities will happen in future’
7 Project Eagle: What was it and why is it in the news?
8 How your country’s history affects the way you think
9 How to build your staff’s resilience while working remotely
10 Marlet secures €65m from AIB for Dublin docklands build-to-rent scheme
Real news has value SUBSCRIBE