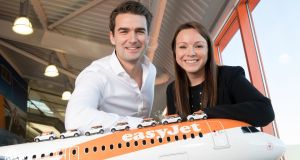 Irish travel technology company Cartrawler has secured its biggest deal in recent years with a four-year contract under which it will become the exclusive online car rental provider for Easyjet.

No financial details of agreement have been disclosed although industry sources described it as a “multimillion euro” deal.

Under the agreement, Cartrawler will oversee all online car rental services for the airline and, in what is reportedly an industry first, is also to be retained as a media partner in a new tri-partnership with Europcar.

The contract is seen as a significant win for Cartrawler, which fought off a number of big names in the travel tech space to secure the deal.

The company, which earlier this year rolled out a new travel mobility platform that allows carriers to offer airport transfer services in addition to car rental, currently has about 100 airlines and 2,500 online travel brand partners on its books. It provides services for a quarter of the top 100 airlines globally, with clients including Alaska Airlines, Jetstar, Swiss, KLM and Emirates.

“This new partnership is the biggest deal we have signed in the past four years. It underlines the scale and pace at which Cartrawler is operating, and is fantastic news for the millions of customers who fly with easyJet each year,” said chief commercial officer Aileen McCormack.

Founded by brothers Greg and Niall Turley in 2004, who grew it out of their family business, Argus Car Hire, Cartrawler is now owned by BC Partners and Insight Venture Partners. The company, which is headquartered in Dublin with additional offices in Tokyo, Helsinki, Manilla, Boston and Sydney, employed over 500 people last year.

Easyjet, which carries more than 90 million passengers annually, last month reported a 26 per cent fall in pretax profits to £427 million for the 12 months to September as revenues rose by 8.3 per cent to almost £6.4 billion.