Apple and Google quizzed in Oireachtas over eavesdropping concerns 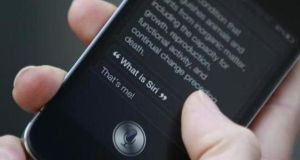 “Your device is not listening to you,” Apple’s Gary Davis told TDs and Senators on Tuesday

Apple has taken significant steps to ensure that employees based in Cork immediately delete accidental recordings captured by its voice activated assistant Siri, the company told TDs and Senators on Tuesday.

The technology giant appeared in front of an Oireachtas committee at which it outlined how it had responded to reports earlier this year that contractors were able to listen to confidential audio recordings. These included doctor-patient calls, sex acts and discussions involving criminal dealings.

Gary Davis, director of privacy and law enforcement requests with Apple and a former deputy data protection commissioner, said it had initiated a programme in recent months to identify possible ‘false activations’ of Siri.

“Your device is not listening to you,” Mr Davis told politicians.

He was speaking after their was uproar during the summer when it was revealed in the Guardian that contractors at Apple’s facilty in Cork and at other sites across Europe, frequently listened to confidential information captured via Siri.

The company laid off 300 contractors working at Apple’s Hollyhill facility Cork in late August as the company undertook a review.

Mr Davis said only Apple-badged employees were allowed to listen to recordings of Siri interactions and that they were instructed to immediately delete audio that was deemed to have been accidentally triggered.

He also stressed that the tech giant no longer retains audio recordings of Siri interactions and said users could choose if they want to share their audio. He also added that any recordings it did check could not be associated with individual users.

“Our mission is to create products and services that enrich the lives of our customers. Unlike others we don’t see their data as a product. That is why we build privacy protection into everything we do. That is why we limit our own access to customer data,” he told the committee.

Google also appeared before the committee.

The company’s public policy manager Ryan Meade was told by committe chair Hildegarde Naughton that “users are fed up of having to jump through hoops” to find out what information the company is storing on them.

In response Mr Meade said the company had “set a high bar for transparency, control and security” with its products and services, including its voice activated assistant.

“We want people to understand their data, make the choices that are right for them, and be assured their data is safe,” he said.

1 Sean Quinn stunned at rebranding of Quinn Industrial Holdings
2 Probate is changing: What does that mean for you?
3 Dublin Aerospace takes over Flybe’s aircraft servicing base at Exeter Airport
4 Will tracker mortgage be at risk if Ulster Bank closes?
5 Irishwoman Adrienne Gormley joins N26 as chief operating officer
Real news has value SUBSCRIBE