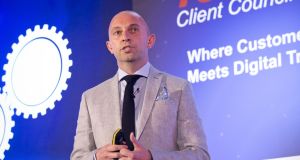 Fenergo chief executive Marc Murphy: ‘We’ve had big wins across all the new segments which is great validation for our strategy.’ Photograph: Colm Mahady/Fennells

Irish fintech company Fenergo recorded yet another boost in turnover last year as it continues to transition away from perpetual licences to a subscription-based revenue model.

The Dublin-headquartered company reported a 21 per cent rise in turnover from €57.8 million to €70.1 million in 2018, which included a 35 per cent increase in software licence revenue.

Fenergo also recorded a pre-tax loss of €12.9 million as against a €2.6 million profit a year earlier.

The company, which was spun out of Irish tech veteran John Purdy’s Ergo Group, provides software solutions for over 75 corporate and institutional banking clients, including HSBC, UBS, BNY Mellon, Scotiabank, Bank of Montreal, BBVA and RBS.

In recent years the company has expanded into new sectors such as asset and wealth management, and in doing so has added key customers including Royal Bank of Canada, UBS and Mizuho.

“We’ve had big wins across all the new segments which is great validation for our strategy,” said chief executive Marc Murphy.

“We actually had the biggest win in the company’s history in the last quarter in the commercial and retail banking space with Australia’s ANZ with a deal that is double the size of anything else we’ve won,” he added.

Mr Murphy said that the move to shift to recurring revenues had slowed things down on the sale front meaning it might not meet the €100 million forecast for 2019. However, he said that in shifting away from perpetual licences made the company more valuable.

“Investors are delighted with the shift and the topline revenues are less important to them even if good from a vanity perspective,” he said.

Ergo sold its shareholding in Fenergo for $75 million (€67.6 million) in August 2015 to Insight Partners and Aquline Capital, who subsequently has invested a further $9.5 million (€8.5 million) in the company.

Fenergo competed a €106.3 million share buyback in September. In addition, it raised €66 million in funding from New York-listed DXC Technology earlier this year in a deal that valued Fenergo at €750 million.

Mr Murphy said that having closed the funding round, it was unlikely the company would seek a public listing next year as previously forecast.

“An IPO is still on the cards but I’d say the DXC deal has pushed it out a couple of years. We are now looking at a summer 2022 timescale now because we don’t need to go public right now as we’ve a ton of capital,” he said.

“Obviously it is one of those milestones like winning the All-Ireland so we’d like to do it but most companies do an IPO because they need to raise capital but we currently have more than we can spend,” Mr Murphy added.

Fenergo last year doubled its spend on research and development to almost €20 million, while headcount rose by 44 per cent. It currently employs about 800 people across 14 offices globally.

1 Opioid executive admits to ‘no morals’ ahead of prison term
2 Little strategic thinking in either Fine Gael or Fianna Fail’s election manifestos
3 Who are Ireland’s 17 billionaires?
4 Are there annual limits on inheritances or gifts to a child?
5 American YouTubers embrace the crisp sandwich
Real news has value SUBSCRIBE