Virgin Media links up with Google for smart home package 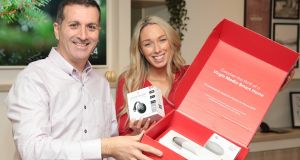 Virgin Media has linked up with Google to offer its broadband customers a smart home package.

The company is hoping to tap into the growing trend for automated devices in the home, offering smart plugs that can be controlled over wifi, the Chromecast streaming device, Google smart speakers, and the Nest Hello video doorbell.

According to research commissioned by Virgin Media, some 60 per cent of Irish consumers plan to buy smart home devices in the next 12 months, and 46 per cent would be more likely to buy the devices if they were offered by an Irish broadband provider.

“We found that although there is a big appetite for smart technology in Ireland, there are a number of barriers,” said Karen Faughnan, senior propositions manager at Virgin Media.

“First and foremost, people don’t really know why they need it. They have an idea that it will make their home smarter, but that’s about it. They’re not really sure until they try it out. Secondly it can be perceived as having a big up-front cost. So for something that you are not 100 per cent certain you need and why you need it, it can be perceived as somewhat expensive. And thirdly, once I have it, how do I set it up?”

Virgin is hoping to tackle those issues by offering the equipment to customers for either a monthly fee over 12 months or an up-front cost, and providing its engineers to install the equipment. Packages start at €15 per month for the entertainment package, €45 for the home automation package and €55 for the complete package, which includes Google’s Home Hub.

The stipulation is that those availing of the smarthome package are Virgin Media broadband customers, giving the company another way to lure customers in the increasingly competitive broadband market.

“There’s a lot of competition in the market, which is good,” said Paul Farrell, Virgin Media’s vice-president of commercial. “A lot of that is around price, some of that is around service. What we have always been about is balancing broadband speed and reliability with customer experience. The feeling is that this is a way to substantiate that further.”

It may also encourage customers to upgrade their broadband package. Mr Farrell said the company was seeing usage among its customer base increase by about 30 per cent a year, a trend that has in part prompted an upgrade in the company’s network that will see it launch 1GB broadband in 2020.