Can nostalgia for the 3310 resurrect Nokia?

Tech Tools: The iconic phone makes a comeback in slightly different form but still has Snake 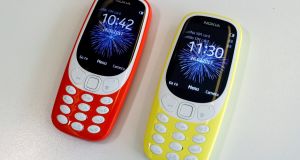 The Nokia 3310 with some polished looks and a €59 price tag. Photograph: Eddie Keogh/Reuters

Pre-2007, when you spoke about mobile phones, everyone automatically thought of Nokia. The Finnish firm got you early on, with phones that were not only reliable and had batteries that lasted for days, but also by adding a few frills such as swappable covers and customised ring tones.

Those were the days when polyphonic ring tones seemed like something to get excited about, and Snake was the closest you came to mobile gaming. Then came smartphones, and the iPhone, and the game changed. Or did it?

It turns out there may be a bit of nostalgia for a simpler phone that lasts more than a day. The Nokia 3310 is back – or at least it will be – with some polished looks and a €50 price tag. The phone that was discontinued in 2005 seems set to ride in on a wave of nostalgia.

It’s not quite the same as the original. It has a camera, a bigger screen and a micro USB charger. But it still has Snake. And a month-long standby battery life, if you just want to use it as an emergency back-up handset.

1 Should I switch bank now with Ulster Bank at risk of closing?
2 Will brother’s widow get half of our parents’ estate when they die?
3 Tick all the right boxes when it comes to your house insurance
4 Belfast mailbox address used by account holder in Russian money-laundering scheme
5 Swiss drug giant Roche pays €380m for Irish biotech Inflazome
Real news has value SUBSCRIBE