Elon Musk reaches for the moon with his timelines 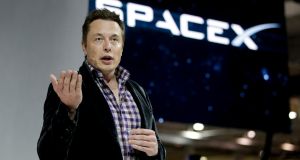 Elon Musk: we can respect the Tesla and SpaceX’s man his ambition but his scheduling leaves a lot to be desired. Photograph: Jae C Hong/AP Photo

You have to hand it to Elon Musk, he’s not short of ambition. The so-called Edison of this age and the man on whom Robert Downey Jr modelled his portrayal of Iron Man’s Tony Stark wowed the global media with news that his firm SpaceX plans to send two people around the moon.

Two lucky space tourists have apparently paid for the privilege to take a one-week trip that will skim the surface of the moon, go further out into deep space, and loop back to Earth – reaching a distance of close to 650,000km.

The plan is to complete the mission in the second quarter of 2018. Yes, you read that right: next year. And that’s just a school run compared to Musk’s statement last year that he was planning to put people on Mars as early as 2024.

You can’t but admire Musk’s energy and ambition. And his track record suggests it is foolish to dismiss his targets as pie in the sky. In his relatively short career he has been behind Paypal, Tesla Motors, Zip2, Solar City and SpaceX. Each of his creations have caused massive disruption in their respective markets.

Yet while we can respect his ambition, his scheduling leaves a lot to be desired. In 2011, he promised to put people in space in three years. Meanwhile, the rocket due to power the moon mission was originally slated for 2013, then 2014. It is due to perform its maiden launch this summer. A US government report also suggests the firm’s space transport may not be certified for another two years.

Given the monumental scale of his endeavours it would be extremely small-minded to drag Musk over the coals for missing a few self-created deadlines. Yet it’s not just in the stars that the great innovator has problems with timelines. Hours before the announcement of SpaceX’s moon mission, Tesla’s shares had fallen by 5 per cent after Goldman Sachs turned negative on its stock as it cast down on Musk’s ability to deliver the electric car firm’s new Model 3 on time.

The firm’s executives say the car is still on schedule to hit the road in July. Goldman analyst David Tamberrino begged to differ and suggested the firm was likely to need to raise capital before the end of the year in light of how fast it was burning through cash. While the public are smitten by Musk’s grand visions, analysts and those financing the deals are more bearish. Society needs visionaries like Musk, now more than ever. But we should perhaps take his timelines with a large pinch of salt.