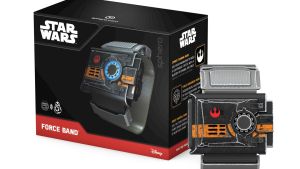 When Sphero released the BB8 Star Wars toy last year, it was well received. The mini-spherical robot was a bit of a hit with fans of The Force Awakens, both because it looked exactly like a shrunken version of the film’s robot and because it was great fun to play with.

But Sphero had to go one better. So the company came up with the Force Band, a way to control BB8 by gesture and really tap into that Jedi mindset. It works like this: the band connects to the Sphero BB8 over bluetooth, and you can then push BB8 away, pull him towards you, rotate him or stop him in his tracks. There are simple gestures that control each of the four functions, but it’s an uncomplicated set of controls.

It’s all controlled by the accelerometer and gyroscope in the band that read your movement.

It all sounds simple, right? Wrong. The Force Band has a bit of a learning curve to it. It’s not just a case of slipping the band on your wrist and instantly getting the hang of the controls. It’s a bit like becoming a Jedi, except with less mumbo jumbo and midi-chlorians.

Expect some clashes with furniture – luckily, BB8 is quite durable, although his head may come free a few times – and other general mishaps while you get to grips with it.

When you see the band initially it looks like a chunky piece of metal equipment. It’s not. In fact, it feels disappointingly plastic. On the bright side, that also means it is lightweight, but there’s a bit of a difference between how it looks and how it feels. The strap has velcro and a magnetic clasp, and the whole thing looks beaten up and worn. In other words, visually it’s perfect.

The band itself charges over micro USB, which should give you a few hours of play at a time.

The most important thing is, it works. Once you get the hang of the movements – set aside a couple of hours – it’s a bit of fun. You’ll be whizzing through homemade obstacle courses with relative ease.

You would think the launch of the Force Band would mean extra functions for the original BB8 app. There is the option of the Force Band in the menu, but that takes you to a screen that prompts you to install another app to use the Force Band – Star Wars Force band by Sphero – which seems a bit pointless.

The new app has a few different modes. Droid control mode allows you to push, pull and control the mini-robot; Force training mode is exactly what it suggests; while Combat training mode brings in lightsabers and blasters.

If you’ve harboured secret desires to train as a Jedi, then the Force Band will satisfy that longing. Once you get over the slightly steep learning curve, you will be able to wave your hands like a Jedi master and have BB8 do your bidding. Most of the time.

The device itself also looks the part, complete with battle worn bits.

For an expensive piece of equipment, the Force Band feels a little too plastic and lightweight. It’s essentially a toy. But it’s a pricey one.

The update required to use the Force Band with the app and BB8 takes a long time to download. Have patience, and, if necessary, be prepared to restart the whole process.

The Force Band has a built-in speaker that will provide some sound effects to make everything seem a bit more realistic.

The new app brings a bit more to the table than the original BB8 software. You can also get some decent practice time in – you’ll need it.

**** Fans of the Star Wars films will love this addition to the lineup – if they’re willing to stretch to the price for a toy.