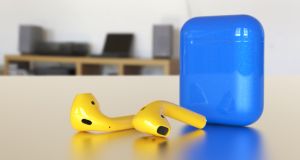 iPhone users can now customise their AirPods with ColorWare

When Apple released the iPhone 7 and 7 Plus, there was one vital feature the phones were missing – the headphone jack. Years of tradition were wiped out in a single move.

Not everyone was happy; no jack meant no wired headphones, unless you wanted to use the included lightning adapter (easily lost) with your standard headphones and sacrifice charging at the same time.

But Apple had another option: Bluetooth. Specifically, the company’s own wireless AirPods, which look exactly the same as the white EarPods that came with your iPhone before, but minus the wires.

But white can be a little bland, which is why ColorWare is offering to customise them for you. You can choose different colours and finishes for your AirPods and the case, ensuring they never get confused with anyone else’s again.

They’re pricey though – $299, although Airpods alone cost €179 – and take up to 12 weeks to get from the United States. The good news is, they will ship to Ireland.