Cameras in taxis: are they a step too far for customers?

Net Results: We all live our lives on camera now but some spaces should still be private 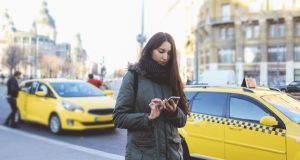 The Data Proection Commission is not generally keen on cameras in cabs, saying, “The continuous recording of passengers in taxis is not compliant with the data protection legislation.” Photograph: Getty Images/iStockphoto

A few weeks ago, I got into a taxi. Nothing out of the ordinary about it, it was just a regular taxi journey. A bit of chat with the driver, talking about the traffic.

It was only at the end of the journey that I noticed the camera on the dashboard. It’s becoming an increasingly common sight in cars here, with drivers using them in case of an accident or near miss. But in this case, it wasn’t a regular “dash cam”. It was a CCTV camera, facing the passengers.

I was a bit taken aback at this. Not because I object to the notion of CCTV in a taxi – I’ve been in plenty that claim to have cameras on board in cities around the world, and given the nature of the business it’s understandable that drivers feel vulnerable and want some protection against attack. The difference this time is that I was unaware it was there – there was no obvious signage to to say there was CCTV in the taxi when I got into it.

I’m not sure why it made me so uncomfortable. Every time you get on a bus, there’s a CCTV camera pointed at you. There are plenty of cameras around the streets of cities, in shops and offices, recording your every move. And that’s before you start taking into account the number of cameras in smartphones that are all around us these days, with footage shared on Facebook, Twitter, Instagram and Snapchat.

Like it it not, we live our lives on camera.

But there’s one subtle difference: awareness. You don’t have an expectation of privacy when you’re on the street. On the bus, you are warned with prominent signs that there is CCTV recording what goes on (even if it isn’t always working). But in a taxi, rightly or wrongly, you feel there should be a bit more privacy, or that you should be warned there isn’t.

The Data Protection Commissioner has guidance on this very situation on its website. Unsurprisingly, the official position is that it is not keen on the idea of cameras in cabs. The footage recorded is, like it or not, personal data.

“In general, this Office would have a concern about the proportionality and justification of installing CCTV cameras in taxis taking account of the legitimate privacy expectations of vehicle users,” the DPC says. “Our general guidance is that while a balance must be struck between the privacy considerations of the service users and the legitimate interests of an organisation to protect its business, the continuous recording of passengers in taxis is not compliant with the data protection legislation.”

However, if you are intent on sticking a video camera in your cab, then the DPC says the footage, which it describes as “extremely invasive”, should not only be restricted from access, but also deleted after 24 hours unless there is a specific reason to keep it.

In this case, the footage was being kept for a month, according to the driver, and then being recorded over unless it was needed. That’s strike one.

Strike two: the DPC says “conditions in relation to prominent notices of such recording would also need to be met”.

I have no idea if the camera also picked up audio; I was just keen to get out of the car. But the DPC considers that particular feature a big no-no.

There are some companies that offer encrypted, monitored services that drivers have no access to, as a safety feature. But there’s a difference between that and a driver installing their own DIY camera system that records to a memory card. This kind of system makes them a data controller and if the driver is keeping the footage at all, would legally entitle the taxi customer to ask for a copy of it.

It’s something that has come up before. There was talk about mandatory CCTV in taxis to protect drivers. But as data protection regulations currently stand, footage taken from CCTV cameras in taxis cannot be used as evidence in criminal cases, so while drivers may feel more secure with the cameras on board, their legal value is limited.

There is another issue to consider: things are about to get a bit more difficult for those who hold personal data on people. In 2018, new regulations will come in covering data protection that will increase the fines for those who fail to meet data protection guidelines, and put greater pressure on data controllers to respond to access requests for personal information held by them.

Thus, while having CCTV cameras in cars may make drivers feel more secure, in future their value may be outweighed by the risks.

1 Bank of Ireland sees about 2,000 staff apply for voluntary redundancy
2 In this strangest of recessions, what happens next for Ireland?
3 Michael O’Leary is the boss you want to lead an airline out of crisis
4 Best Covid-19 ‘influencers’ will avoid hectoring
5 Should I switch bank now with Ulster Bank at risk of closing?
Real news has value SUBSCRIBE