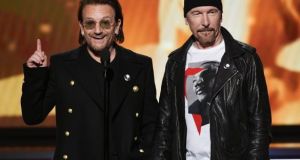 Bono and The Edge have emerged as investors Convoy, a start-up that helps connect trucking companies with freight shippers

U2 frontman Bono and lead guitarist The Edge have emerged as backers of Convoy, an on-demand trucking technology company, whose other investors include Amazon chief executive Jeff Bezos and Microsoft co-founder Bill Gates.

Based in Seattle, Convoy last year raised $62.5 million (€52.6 million) of Series B venture funding in a deal led by Y Combinator to bring total funds raised to date to more than $80 million (€67.4 million).

It has since been revealed that Bono and The Edge made a separate investment in the start-up, the financial details of which have not been disclosed.

“Bono and The Edge know more about trucking than you might think. They’ve spent most of their adult lives touring the world with U2, and trucks are an essential part of moving the show from city to city,” said Dan Lewis, co-founder and chief executive of Convoy.

“When they heard about Convoy, they loved that we are using technology to empower millions of truckers to grow their businesses while at the same time reducing empty miles and waste,” he added.

Convoy is a provider of on-demand shipment services designed to connect trucking companies with freight shippers. It has been described in some quarters as an “Uber for trucking”.

Other backers of the company include Salesforce chief executive Marc Benioff and LinkedIn co-founder Reid Hoffman.

This is by no means the first tech investment made by Bono and The Edge. Bono previously co-founded private equity firm Elevation Partners which has backed both Facebook and Yelp. The two have also invested in Dropbox and in Irish start-up Nuritas, a company that uses data mining of molecules in food and food byproducts to identify supplements and new drugs.