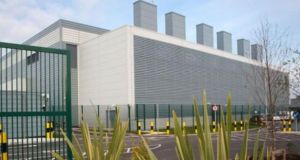 Google’s data centre at Grange Castle in south Dublin. The search giant’s expansion of the facility is expected to take 16 months to complete.

Google has announced a €150 million expansion at its data centre in Dublin in a move which brings the company’s total investment in the Republic since 2003 to €1 billion.

The search giant said the new facility at Grange Castle, in south county Dublin, would lead to the creation of 400 temporary jobs during the construction phase and take 16 months to complete.

With the latest announcement, its spend in the Republic on data centres alone comes to €500 million, Google said.

The centre houses servers that run many of the company’s main products including Gmail, Google Maps and its search engine.

“There is no denying that this is a considerable vote of confidence in Ireland as a place to do business. Not only that, but given the importance of data centres in keeping web-based and cloud services running smoothly, this development is also an endorsement of our country’s technical expertise and infrastructure,” said Minister for Business, Enterprise and Innovation Heather Humphreys.

A report compiled by Copenhagen Economics into the impact of Google data centres on the Irish economy shows the facility has resulted in a €350 million direct investment in construction and operations. It has also led to a €400 million contribution to Ireland’s gross domestic product (GDP), and supported almost 5,000 jobs.

“Our data centres are essential to our operations both in Ireland and across the larger Europe, Middle East and Africa [EMEA] region, allowing consumers and business to use our cloud-based tools and software far more efficiently and effectively. This investment shows our continued commitment to Ireland as a key driver for the whole EMEA region,” said Terence McGoff, engineering director at Google.

The tech giant currently employs more than 7,000 people in the Republic. Once the new expansion has been completed, about 100 employees will be working in the data centre.

Grange Castle is also home to data centres owned and operated by Microsoft and Interxion. Other companies to have data centres in the Republic include Amazon.

The difficulties experienced by Apple in developing an €850 million facility in Athenry, Co Galway, do not seem to have put off companies from wanting to build such centres here.

A forecast published last month estimated that investment in the construction of data centres in Ireland will reach more than €9 billion by 2021.

The report, which was produced by Host in Ireland in association with Bitpower, said the €1.1 billion invested in 2018 would bring total cumulative investment to €5.7 billion by the end of the year.

There are currently 46 active data centres in total in the Republic, with the largest cluster based in and around Dublin.

Data centres accounted for an estimated 5.5 per cent of the State’s power requirements at 1.56 terawatt hours (TWh) in 2017.