Explore the Milky Way in VR with Gaia Sky

Weblog: Visualise a star map and cruise the galaxy from the comfort of your keyboard 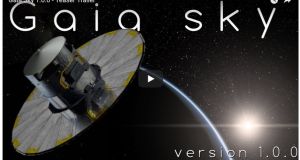 Gaia Sky works on Windows, Linus and macOS and is 3D-ready, optimised for VR headset mode.

The European Space Agency’s (ESA) Gaia satellite was launched in December 2013 on its orbit of the sun with a five-year mission to survey the stars resulting in 40GB of data sent back to Earth on a daily basis. Last week, the ESA announced Gaia’s success in mapping the distances, motions and colour information for 1.3 billion stars as well as the sky position and brightness of almost 1.7 billion in the Milky Way and neighbouring galaxies, giving us the most detailed star map ever made.

If you want to experience this star map, you can download the open source Gaia Sky software for free: Gaia Sky is real-time, 3D, astronomy-visualisation software developed at Heidelberg University, Germany using ESA data. What can you do with this? Aside from virtually sitting inside Gaia and taking in the view, you can go take control of a spacecraft and use your keyboard or gamepad to cruise the galaxy.

Gaia Sky works on Windows, Linus and macOS and is 3D-ready, optimised for VR headset mode. It also has “Planetarium projection mode” meaning it can create videos for use with spherical full-dome projection systems.

1 NI house builder apologises to Harry and Meghan over adverts
2 Little strategic thinking in election manifestos of Fine Gael and Fianna Fáil
3 Volvo warns of scaled back car line-up if UK splits from EU rules
4 Are there annual limits on inheritances or gifts to a child?
5 Opioid executive admits to ‘no morals’ ahead of prison term
Real news has value SUBSCRIBE