Banks deny claims there is policy to discriminate against cryptocurrency sellers 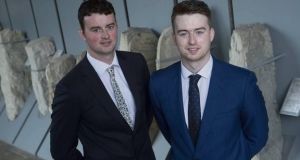 Bitcove founders James and Peter Nagle: they are particularly aggrieved given the company was previously awarded a Bank of Ireland-sponsored “best business start-up” award

Several companies providing cryptocurrency services say they have either had to stop trading or have been forced to open foreign bank accounts to keep afloat after Irish lenders refused their business.

One such company, Cork-based Bitcove, said it was particularly aggrieved by the situation given it was previously awarded a Bank of Ireland-sponsored “best business start-up” award.

Some start-ups claim to have been “unbanked” by lenders, meaning that financial institutions have withdrawn banking services. Other say they have never been given an opportunity to open bank accounts in the Republic.

Bitcove, a bitcoin exchange established by brother James and Peter Nagle in 2014, said it had previously had banking facilities with AIB, Permanent TSB and Bank of Ireland. However, the lenders had since closed the company’s accounts.

“The reasons cited has been that they do not support companies offering cryptocurrency exchange facilities despite the fact they had previously given us an account for this purpose,” Peter Nagle told The Irish Times.

“Particularly disappointing was Bank of Ireland. We were participants on the Ignite start-up programme, which is backed by the bank. Our business and its progress were reviewed monthly by a panel which included Bank of Ireland representatives. At the end of the incubator Bitcove won the award, but then just a few months later our accounts were frozen and eventually closed.”

The company has since found new banking facilities in Europe with what it called “a more progressive banking partner”.

Eircoin, one of Ireland’s oldest bitcoin brokers, closed in April, with its co-founder Dave Fleming saying “we are being shuttered due to a negligent and defensive banking system”.

Mr Fleming and his business partner Roisin Coogan say that as well as being unbanked for Eircoin, a new secondary consulting business was also refused banking services.

Rival lender AIB denied any suggestion it was refusing banking to companies offering crypto services. “We don’t discriminate in relation to providing banking services to cryptocurrency companies nor have we been systematically exiting such companies,” said a spokesman.

However, he went on to add that the bank was required to adhere to anti-money laundering (AML) and know your customer (KYC) regulatory requirements for opening and operating bank accounts, and said in some instances companies were unable to comply with these.

The Banking and Payments Federation of Ireland, which represents 70 financial institutions, said it was not aware of any policy to close accounts which trade in cryptocurrencies. However, it added that lenders were obliged to take “reasonable and proportionate measures to lessen the risk of facilitating financial crimes which are enabled by cryptocurrencies, such as money laundering and terrorist financing”.

Mr Fleming accused the federation of “seeking to muddy the waters with insinuations of ‘dirty money’.”

“If any of the bitcoin sellers in Ireland were involved in terrorist financing I’m sure it wouldn’t be a bank discussing it with us, it would be the law,” he said.

The businessman said he and other cryptocurrency sellers had consulted with the Central Bank previously, and been advised that as long as they were abiding with the regulations then they were all operating in line with the law.

Mr Fleming said the whole affair “reeked of regulatory capture”, and stood in sharp contrast to the “arms wide open attitude” of IDA Ireland, which has recently backed a new initiative focusing on blockchain, the technology that underpins cryptocurrencies.

1 British exceptionalism backfires in style as Johnson tests positive for coronavirus
2 Wetherspoon’s panto-villain chairman may have the last laugh
3 UK needs to be honest about its Covid-19 strategy
4 Will Covid-19 force Primark to rethink decision not to sell online?
5 Remote working doesn’t suit everyone, and it exposes woolly leadership
Real news has value SUBSCRIBE