Indeed’s new offices could accommodate up to 2,000 workers

Online recruiter ‘well ahead’ with its hiring plans for Dublin headquarters 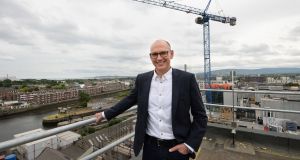 Online recruiter Indeed will have space to increase its Irish workforce to 2,000 once its new offices are complete, according to chief executive Chris Hyams.

Indeed employs 850 people at St Stephen’s Green in Dublin and has already announced plans to increase this to about 1,600 in coming months.

Mr Hyams, who was in Dublin this week, said it was already “well ahead of pace” with its hiring plans.

The US-based group will begin moving into new, specially fitted out offices that Mr Hyams noted would ultimately have the capacity to hold about 2,000 workers.

However, he would not be drawn on whether Indeed eventually intended recruiting that number, beyond saying that the company continued to grow rapidly. “It will definitely be past 1,000 next year,” he said.

Mr Hyams did not say what the property would cost. Industry sources calculate that the US giant may be paying €50-€55 a sq ft, implying a yearly rent of €11-€12 million.

Growing concerns about the cost of doing business in Dublin, highlighted this week by claims that living there costs more than oil-rich Abu Dhabi, have not put Indeed off the city.

“All of the cities that we operate in are competitive and have strong demand for office space,” he said. Mr Hyams pointed out that Indeed had businesses in places such as Austin, San Francisco and Seattle in the US, and Singapore, London and Paris elsewhere.

He stressed that the Republic’s low tax on profits was “ not a big driver”. Instead, the company sought a location with a multi-lingual talent pool – 19 nationalities work in its Irish office – that was an attractive place to live and with good services.

“When we looked at Europe, there is only a handful of spots that have all the factors that Dublin has,” Mr Hyams said.

Support from State agencies was also key. “The IDA was incredibly helpful,” he added.

Its site carries ads for 20 million posts around the world on any given day. Most listings are free, but employers can opt to pay to get extra prominence, if, for example, there is strong competition for the skills they seek. This is what pays the bills.

“We help people get jobs,” Mr Hyams explained. “Most sites had a classified model. Our idea is to take all the jobs and put them in one place and make it simple and easy.”

1 Should my mam wait for house prices to drop before buying?
2 Brother is dragging his heels as executor of uncle’s will - is there anything I can do?
3 Apple tax case: Four individual lawyers paid over €500,000 each
4 Parts of Brown Thomas and Arnotts to reopen next week
5 Covid-19 mortgage breaks: What’s the catch?
Real news has value SUBSCRIBE