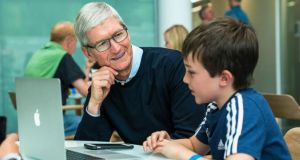 Apple may consider locating another data centre in Ireland, said its chief executive, Tim Cook, as he restated the company’s commitment to its Irish operations.

A two-year delay caused by legal appeals against a previous Apple data centre project saw Athenry in Co Galway ultimately lose out on the investment as the tech giant opted for another location. Mr Cook said he would welcome changes proposed by the Government to planning rules that would reduce time limits for some planning applications and tighten the rules for who is eligible to take judicial review proceedings.

The Apple boss said that when its requirements dictated that Apple needed to expand its data centre capacity, it would consider Ireland again.

“We don’t plan on stopping growing, and so things will come back around at some point in time,” he said.

Mr Cook said the company respected the Irish planning process, it just needed to work more quickly to provide certainty for businesses trying to make decisions that impacted their future.

“This was something that we really wanted to do and we stuck with it for quite a long time in the hope that things would move forward. We very much respect that there has to be a process for people to disagree, and I think that’s positive,” he said. “I would hope that the process can just work faster because businesses need a level of certainty over time. That doesn’t mean that every call should be what we want or what any company wants, but the speed of it is key.”

Mr Cook said Apple was committed to Ireland. “We’ve been here since 1980. We have a very long-term relationship with the country,” he said. “We find the ingenuity and the innovativeness of the people to be just phenomenal.”

He dismissed any suggestion that changes to Ireland’s corporation tax regime would impact on Apple’s commitment to operations here.

Apple employs 6,000 people in Ireland, with the majority based at its operations in Cork. In 2015, the company announced it would add 1,000 jobs at the Hollyhill facility.

The company also has 17,000 iOS app developers in Ireland, a number that is continuing to grow, Mr Cook said.

“There are very successful companies like [Hostelworld] who have been around for some time to people who have only just started in the last year or so,” he said. “The real magic behind it is they can focus on their passion.”

Mr Cook said the app economy also opened up global markets to smaller developers. “It’s a phenomenal change that really is only a decade old. Someone can sit in their basement or in their home, and with the push of a button all of a sudden can be selling in 155 different countries,” he said. “It’s unbelievably empowering. It’s one of the largest job-segment growths in the economy in most countries in the world.”

Mr Cook began his Irish visit with a meeting with Taoiseach Leo Varadkar on Monday evening, and a visit to Hostelworld in Leopardstown, Co Dublin, to talk to the service’s iOS development team.

In Cork, he met staff in Hollyhill, along with another crew of iOS developers. They included 14-year-old developer Niall Kehoe, who used the opportunity to get advice on his upcoming app, aimed at helping farmers and other workers to manage their finances.

Mr Cook, who has been critical of the US government’s separation of immigrant families at its border with Mexico, called for “calm heads” on the issue of tariffs on imported goods, saying he believed they become a tax on local consumers.

“I’m a big believer that free trade is a key part in what has lifted the world. I’m also a believer that in some cases globalisation has hurt people in some countries. I think we all need to focus on how to help those people also benefit,” he said. “But I don’t believe creating an issue on the other side helps these, I just think more people are being hurt, so to speak. So I’m hoping for a quick resolution.”

1 DHL boss Frank Appel: ‘We’ll be back to normal sooner than people think’
2 What is Covid Tracker Ireland?
3 Copper Face Jacks pays out €45.95m in dividends to owner
4 Rents edge up in June as house prices fall
5 C-Pen Reader Pen: A useful aid for students and dyslexics
Real news has value SUBSCRIBE