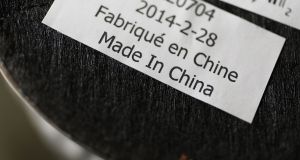 European and US stocks fell and bonds surged as US president Donald Trump moved his country closer to a trade war with China, while investors also weighed diverging monetary policies from the US Federal Reserve and European Central Bank. The escalating trade spat also sent UK stocks tumbling.

The Iseq fell 0.7 per cent on a difficult day for bourses across Europe. Bank of Ireland fell by more than 5.5 per cent to €6.66, after Goodbody analysts told clients that the bank’s loan growth targets in the UK and for corporate clients are too ambitious, and their fee targets too high. The note came after the bank held a capital markets day with institutions earlier this month.

CRH fell close to 1 per cent, despite gaining regulatory approval for its $3.5 billion takeover of Ash Grove Cement. It must divest plants in three US states to get the deal over the line.

Tullow Oil, which maintains its main listing in London, fell 3.6 per cent to €2.65 on the Iseq, as the price of crude slid on international markets.

Despite an early morning pick-up, Irish Continental Group, the owner of Irish Ferries, later slipped back into the red. It finished the session at €5.27, down 2.6 per cent. It capped a tough week for the stock after ICG announced the cancellation of a raft of sailings due the late delivery of a new vessel.

The FTSE 100 ended the day down 1.7 per cent, resulting in a 0.6 per cent loss on the week. One bright spot, however, was Rolls-Royce, which jumped 7.6 per cent after the engine maker issued ambitious mid-term goals.

Elsewhere, the mid-cap FTSE 250 fell 1.5 per cent and suffered its worst weekly fall in three months. Mining stocks, which are highly sensitive to trade tensions, were hard hit. The pan-European basic resources sector lost 3.3 per cent in its worst daily fall since November 2016.

Copper hit a one-week low as trade tensions added pressure to the commodity already dented by worries over slowing growth in top metals buyer China. Rio Tinto, Glencore, BHP Billiton, and Anglo American were top fallers, down by 4.1 to 4.5 per cent. Heavyweight oil majors BP and Royal Dutch Shell fell 3.2 to 3.5 per cent as oil prices fell sharply ahead of an OPEC meeting next week.

The French Cac 40 and German Dax ending the day down nearly 0.5 per cent and 0.7 per cent, respectively. The pan-European Stoxx 600 index ended the day down 1 per cent.

Euro zone banks were weak on trade concerns and also this week’s news that the ECB will keep interest lower than expected. UBS, BBVA and BNP Paribas were the biggest drags, falling 1.3 to 3 per cent.

French tele-services provider Teleperformance jumped 5.8 per cent to a record high after agreeing to buy India-based Intelenet from US private equity firm Blackstone for $1 billion.

The S&P 500 Index dropped Friday, erasing its weekly gain, after the US announced a list of $50 billion of Chinese goods targeted for tariffs and China said it would have to respond.

Trade-sensitive sectors including tech hardware led the decline. Energy firms also got hit by a drop in oil prices.

In response, China’s Commerce Ministry said it planned to impose tariffs of similar size and intensity.

Beijing has published its own list that targets $50 billion in US goods, including soybeans, aircraft and autos. Boeing, the single largest US exporter to China, fell 1.9 per cent, dragging the Dow lower for the fourth day in a row.